Introduction:
I have learned some thing about TV in one of my B.tech semester but I forgot most of them. Now I refreshed a few basics and tried to implement a monochrome PAL TV signal generator using an AVR micrcontroller. I was using PIC earlier but later I jumped to AVR because I loves the USBASP programmer, the free avr-gcc compiler and the user friendly architecture of AVR microcontroller .Also at any time, if I feel little bit lazy, they I can try arduino also. 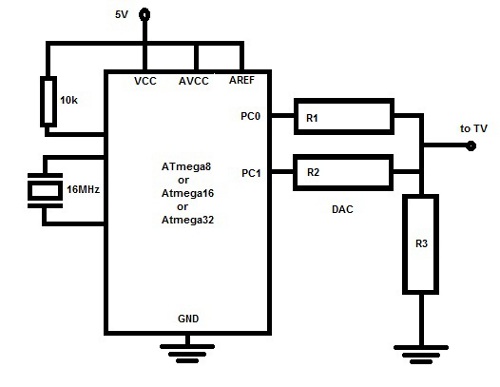 At first, my aim was to display few A B C D letters on my tv screen. But it is not possible for a beginner to do it directly(at least in my case) without doing any hello world stuff on TV. The first and the basic hello world pattern which one could display very easily on his tv is a vertical line of desired thickness and position. This is very easy because we don’t need to provide any vertical synchronization to lock the picture scrolling on vertical axis, what we need to provide is a horizontal synchronization only.

Introduction: I am interested to draw lines, square, rectangle, circle etc on my TV screen. At first I was confused...