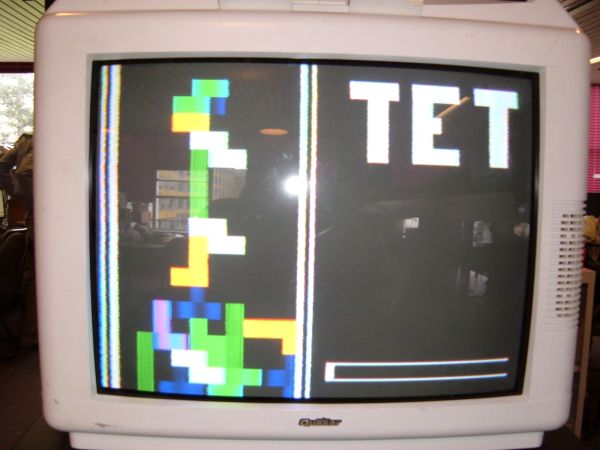 High Level Design
Overview
This project consists of two different parts–the hardware and the software. The hardware part consists of connecting the correct inputs and outputs in order to combine the Mega32, the AD724 RGB-NTSC converter, and the ELM304 Sync Generator.
The core of the hardware design is the AD724 RGB-NTSC converter. This chip takes an RGB signal and a composite sync to produce a TV signal that can be recognized by any standard NTSC TV. The RGB input are the 3 bits that are relayed by the Mega32. Since the Mega32 must be able to communicate with the AD724, it must trigger part of its code at the same clock frequency as the AD724. Thus, the AD724 horizontal sync input and the Mega32 interrupt trigger signal is the same signal that is delivered by the ELM304.
The most difficult part of implementing color is to be able to synchronize the software to the vertical and horizontal sync pulses. The software design must be able to detect and distinguish the vertical and horizontal sync signals. Once this is done, the rest of the game code can be implemented using the controls that were implemented by the signal synchronizing portion of the code.
We have chosen to implement 8 colors, with the inclusion of black and white, for simplicity. These 8 colors are merely binary combinations of the 3 color bits. Black represents the background whereas the other colors represent the different pieces in the game.
Hardware Design
Basic Idea
This project consists of two fundamental parts.
The first, and the more time consuming part, is the hardware design. The big problem is –how does one generate color and display it onto the screen? The standard NTSC signal consists of all levels of color, distributed in a fashion that allows the TV to distinguish between them. As visible in the NTSC video signal image below, the video signal is comprised of the beginning of the sync. Once this beginning is seen, a burst of signal is sent, followed by the color. In this case, black corresponds to the lowest voltage level while white is the highest.
It is relatively simple to get a black&white signal since all one has to do is produce a burst and just select high or low logic levels to output with the TV signal. However the color signal is more complicated. Given the timing and memory limits of the chip, it would be rather difficult to produce color. The simple solution is to use a RGB-NTSC converter.
We chose to employ the Analog Devices AD724JR chip for this purpose. The chip uses separate analog and digital power and ground connections (one must remember to use coupling capacitors with both the power inputs, details are in the AD724 data sheet). It also requires a sync signal, which allows it to synchronize itself to the RGB signal. The chip must be given separate horizontal and vertical sync signals. In addition, it has three inputs that correspond to red, green, and blue. This RGB signal is generated by the Mega32 with special timing. Once the chip receives this RGB signal, it combines it with the horizontal and vertical sync pulses to create a NTSC color signal. This signal is relatively high, in terms of ground. Thus, it must be decreased using a capacitor and a resistor so that the TV can differentiate among critical aspects of the video signal. Also, this signal is not a perfect NTSC signal and thus leads to noticeable distortion/wiggle on the screen. The output signal is delivered through a standard RCA video cable to the color TV.
For our purposes, a outside vertical sync signal is not required since our sync generates is able to produce a composite sync. So, the vertical sync input on the AD724 is left high. We chose the Elm Electronics 304 Sync Generator to deliver our sync signal. This chip also requires a coupling capacitor to the power input. It produces an approximate of a 15KHz signal that can be delivered to horizontal sync input of the AD724.
Both the AD724 and the ELM304 run on 3.58MHz clocks. This is required in order to adhere to color video signal generation standards.
The Mega32 is interfaced to the AD724 through PORTC. Three of the pins of this port are designated as red, green, and blue, that serve as inputs to the AD724. The Mega32 runs on a 16MHz clock. Yet, in order to be able to communicate with the AD724, the Mega32 software must also have a 3.58MHz reference. For this purpose, an interrupt was designed to trigger with the ELM304 signal and produce an RGB signal. PORTD is reserved for this interrupt. PORTA of the Mega32 is used to interface with the Sega Genesis serial controller. This port serves as both input and output for the controller where the inputs accept button-press signals and the outputs supply power and ground.
A simple Sega Genesis controller was used to control the game on TV. This controller was chosen over some other controllers on the market since it has no synchronous logic and the buttons simply short connections to give a high or low signal. Low logic signals are interpreted as button pushes. Since we had two controllers, we cut the plug off one of them in order to determine which wires carried the signals for which buttons.

While space debris was the uncontrolled adversary in the award-winning space thriller film "Gravity," space debris, also known as "space...