We route all our PCBs manually instead of using an autorouter. This can be a tedious job sometimes, but we think it gives the best results.
Sometimes we’re just about to finish a PCB, when we notice a MUCH better way to route it if only a few connections could be changed. The Gateswap and Pinswap tools can help. They can quickly change connections between interchangeable pins or peripherals in an IC. These tools add flexibility to a designer dealing with complex and cramped routing. 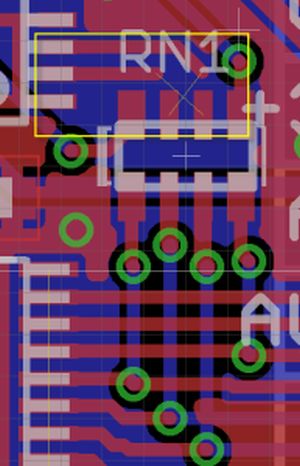 4 gates inside an 74xx00
Swapping interchangeable gates
Gate swapping is available only to chips that have interchangeable devices in a single package. A good example of these is the 74xx00 logic IC which has four 2 input NAND gates,  the 74xx573 with eight latches, and even LM324 dual op-amps. These chips have multiple identical devices, so you can swap them without affecting your circuit.
Swapping interchangeable pins
A good example for this is the 74xx10 which contains 3 input NAND gates. Each input pin of the NAND gate is interchangeable among the others.
Another example is the 74xx4066 bilateral switch used on the Bus Pirate. Input and output can be swapped since they only act as an analog switch. Swapping their pin connection is OK without having to worry about the impact on the circuit.
How to Gateswap
We have a resistor array RN1 as an example below, that’s four resistors in a single pack. Using arrays is usually cheaper because there are fewer parts to place and inspect. Resistor arrays are a good example for both pinswaping and gateswaping because resistors are bidirectional, and all the resistors inside the package are identical to all the others.

The Elevator Pitch We successfully implemented a prototype RFID checkout system that will enable consumers to instantly pay for their...