DDC’s HSN-1000 radiation-hardened Hybrid Nuclear Event Detector (NED) senses ionizing radiation pulses generated by a nuclear event, such as the detonation of a nuclear weapon, and rapidly switches its output from the normal high state to a low state with a propagation delay time of less than 20ns. The active low Nuclear Event Detection signal (NED) is used to initiate a wide variety of circumvention functions, thus preventing upset and burnout of electronic components. The NED output is also used to initiate both hardware and software recovery. This high-speed, 14-pin hybrid detector is used in electronic systems as a general-purpose circumvention device to protect memory, stop data processing, and drive power supply switches as well as signal clamps. 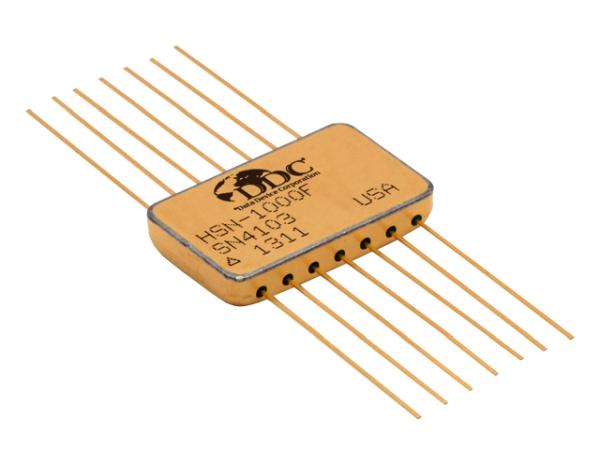 The HSN-1000 is guaranteed to operate through three critical environments: ionizing dose rate [1012 rad(Si)/s], gamma total dose [106 rad(Si)], and neutron fluence [5 x 1013 n/cm2]. In addition, the device is designed to function throughout the transient neutron pulse. The hybrid’s discrete design ensures a controlled response in these radiation environments as well as immunity to latchup. Each HSN-1000’s detection level and functionality are tested in an ionizing dose rate environment. A certificate is provided with each serialized hybrid, reporting the radiation test results and guaranteeing its performance. The device is also lot qualified in the total dose and neutron environments to ensure performance.

The detection threshold of the HSN-1000 is adjustable within the range of 2 x 105 rad(Si)/s to 2 x 107 rad(Si)/s. This detection level can be preset by DDC or adjusted by the user. Less than a 30% variation in detection threshold can be expected over the entire operating temperature range.

Two PCBs from earlier projects were used in this project: LoRa breakout board Sensor PCB with Si7013 humidity sensor from...