Amazing 3 dimensional LED display.
64 LEDs makes up this 4 by 4 by 4 cube, controlled by an Atmel Atmega16 microcontroller.
Each LED can be addressed individually in software, enabling it to display amazing 3d animations!
8x8x8 LED cube now available, by popular demand:
http://www.instructables.com/id/Led-Cube-8x8x8/

First of all, you need quite a bit of time to solder together 64 leds 😉
Knowledge list: 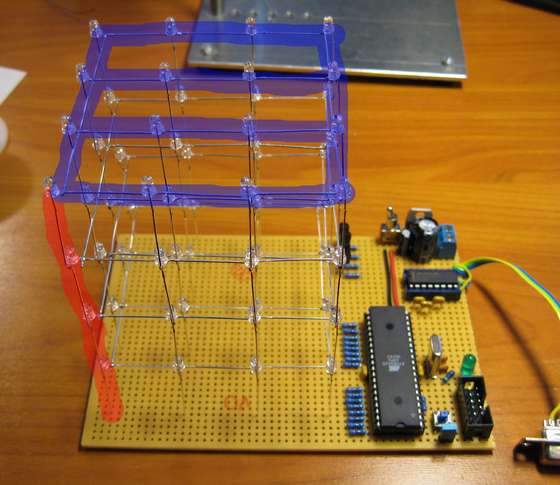 How to control 64 LEDs without using 64 individual wires? Multiplexing!
Running a wire to the anode of each led would obviously be impractical, and would look really bad.
One way to get around this, is to split the cube into 4 layers of 16×16 LEDs.
All the LEDs aligned in a vertical column share a common anode (+).
All the LEDs on a horizontal layer share a common cathode (-).
Now if i want to light up the LED in the upper left corner in the back (0,0,3), I just supply GND (-) to the upper layer, and VCC (+) to the column in the left corner.
If i only want to light up one led at a time, or only light up more than one layer at the same time.. this works fine.
However, if I also want to light up the bottom right corner in the front (3,3,0), I run into problems. When I supply GND to the lower layer and VCC to the front left column, I also light up the upper right led in the front (3,3,3), and the lower left LED in the back (0,0,0). This ghosting effect is impossible to workaround without adding 64 individual wires.
The way to work around it is to only light up one layer at a time, but do it so fast that the eye doesn’t recognize that only one layer is lit at any time. This relies on a phenomenon called Persistence of vision.
Each layer is a 4×4 (16) image.
If we flash 4 16 led images one at a time, really fast, we get a 4x4x4 3d image!

Soldering grids of 4×4 LEDs freehand would look terrible!
To get 4 perfect 4×4 grids of LEDs, we use a template to hold the them in place.
I wanted to make the cube as easy as possible to make, so I chose to use the LEDs own legs as much as possible. The distance between the lines in the grid was decided by the length of the LED legs. I found that 25mm (about an inch) was the optimal distance between each led (between the center of each led that is!) to enable soldering without adding or cutting wire.

Making the cube, solder the layers
We make the cube in 4 layers of 4×4 leds, then solder them together.
Create a layer:

Making the cube, connecting the layers

Now that we have those 4 layers, all we have to do is to solder them together.
Put one layer back in the template. This will be the top layer, so choose the prettiest one 🙂
Put another layer on top, and align one of the corners exactly 25mm (or whatever distance you used in your grid) above the first layer. This is the distance between the cathode wires.
Hold the corner in place with a helping hand and solder the corner anode of the first layer to the corner anode of the second layer. Do this for all the corners.
Check if the layers are perfectly aligned in all dimensions. If not bend a little to adjust. Or re-solder of it’s the height distance that’s off. When they are perfectly aligned, solder the remaining 12 anodes together.
Repeat 3 times.
For more Detail: LED Cube 4x4x4 using Microcontroller Atmega16

This is merely an instructable to explain how this device operates. I hope everything is not too obfuscated. This prototype...