This is merely an instructable to explain how this device operates. I hope everything is not too obfuscated.
This prototype consists of three 8×8” modules. Each module operates independently of each other. Each module consists of 4 “pixels”. Each pixel is 4 inches square and consists of 21 LEDs, two IR emitting diodes, and two IR photodiodes. The mode of sensing is active infrared.
Check out my Color Changing Glowing Faucet


The IR sensor is a simple voltage divider former by two parallel IR photodiodes which are wired reversed biased. When a photodiode is reversed biased (like an LED connected up backwards) it acts like a variable resistor which changes resistance with respect to the amount of light (mainly infrared light) falling on it. The high resistance of the second static value 1 Megohm (R2) provides a voltage divider with the dividing node rising in voltage with an increase in IR light falling onto the photodiodes(R1).
V-in is 5 volts. 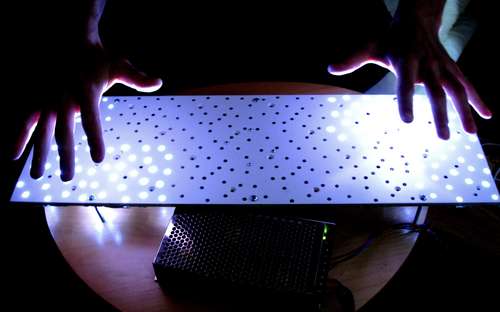 The IR emitters are 3mm infrared LEDs that I got from mouser.com. In order to experience greater sensing range, the IR emitters have to be very bright. Thus we have to push a lot of current through them. The datasheet for these say they are capable of maintaining a forward max current of around 100mA and a pulsed current (of less than 100 microseconds) of around 1 amp. Now having a whole array of IR emitters that are always on would be a very power hungry set up. To get around this, the IR emitters are connected to the darlington chip to so the controller can trigger when they are on and off. Because an ADC conversion happens so quickly, we can simply turn on the IR emitters, wait a bit for the IR sensor to settle, take an ADC reading, and then turn them off. This doesn’t take very long, maybe 200 microseconds total. Since one IR emitter is on per every Timer 1 ISR firing, we can get an average power usage of the IR emitters.  Timer 1 counts from 0 to 65535, for a total of 65536 clock cycles. At 8MHz fCPU, it takes the controller roughly 8.2 milliseconds to count from 0 to 65535. So we know that an IR sensing sequence happens once every 8.2 milliseconds. We simply get the average power consumption by finding the percentage of time that the IR emitters are on. Since the IR sensing sequence takes roughly 200 microseconds (0.2 milliseconds) of the entire 8.2 millisecond, that’s 0.2/8.2 == roughly 2.5%. The IR emitters have roughly 140mA pushed through them. So simply 2.5% of 140mA == roughly 3.5mA total to accomplish the same level of sensitivity as if the IR emitters stayed totally on.  This equates to dissipating only 18 mWatts instead of 700mW per module.
Two IR emitters are connected in series per pixel. The supply voltage is 5 volts. The rest of the voltage is dropped by  a small 10 ohm resistor to regulate the high current flow. The IR emitters and IR photodiodes are connected to the 5V supply. Whenever the IR emitters are turned on, a small amount of current is actually pulled away from the IR photodiode voltage divider arrangement. The photodiodes being reversed biased allows this to happen. This reverse flow creates a dip in the voltage level at the node where the ADC reading is taken. I got rid of this dip by putting a small value capacitor (47pF – 100 pF) across the 1Mohm resistor of the voltage divider. This greatly reduces the level of dip, but also costs time to charge up the capacitor when the voltage level rises quickly. All of this is easily seen with an oscilloscope. I have attached snap shots of my screen oscilloscope reading. This is the source of requiring a software delay, to allow time for the voltage level to reach its peak at the sampled node of the voltage divider.

San Jose, California (PRWEB) January 24, 2012 One of the commonly quoted challenges for wafer-level 3D-IC stacking is yield. When...