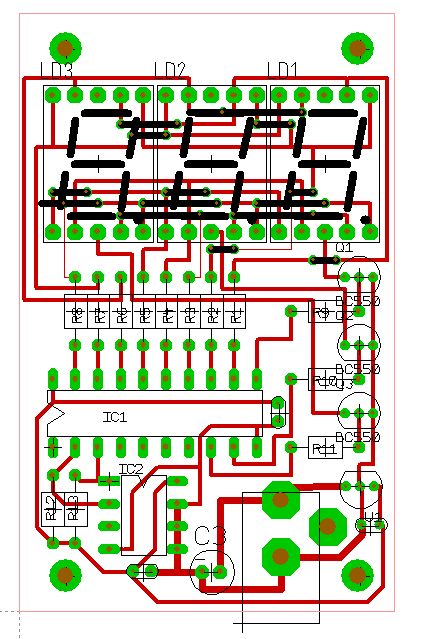 The TCN75 from MicroChip is used to measure the temperature. The TCN75 has a 2 wire serial interface, which is a bidirectional bus with a speed up to 400Kbs. Up to eight devices of the same type can be controlled by the bus. In this case only one device is connected to the ATTiny2313 microcontroller. The 2 wire bus is also called I2C, this name is proprietery to the Philips Electronics company. I2C is a abbreviation for IC Inter Circuit. The TCN75 has also a build in programmable thermostat, which is not used in this circuit.

The ATTiny2313 is used the control the two wire serial interfacing with the TCN75 and to translate the information for showing on the three digit 7-sement display. The reading of the temperature from the DS1621 happens every 3 seconds. A ceramic resonator is used for clocking the microcontroller. 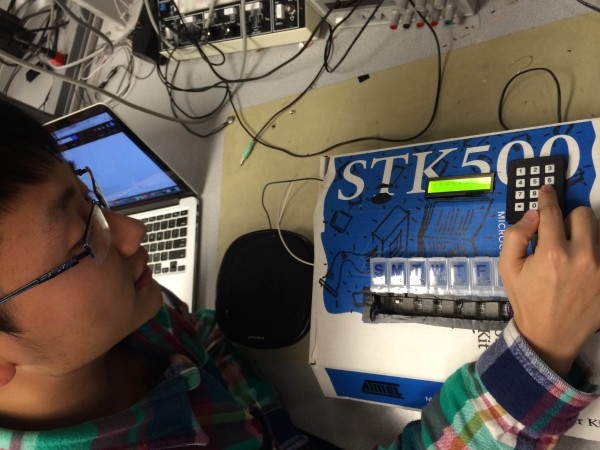 The three 7-segment displays are of the common cathode type, at each cathode the display is connected to a transistor for ampifying the current. The transistors are of the NPN type and are controlled by the ATTiny2313 microcontroller. Each segment of the display is connected to a 200 Ohm resistor to limit the current of the ATTiny2313 port. The multiplexing of the three displays is handled in the software. Each display lights up consecutively for 5ms seconds. The LED digits have a height of 14,2mm (0.56″).
The circuits needs a 5V DC regulated power supply and draws about 50mA current. It can also be supplied with three 1.5 volt batteries, but then the brightness of the LED’s will be less. Three D-type batteries will last for about one month.

This example is based on a LCD module with the Hitachi HD44780 LCD-controller.You can get these displays in various kinds, from...