Libre Computer has successfully launched a smaller, less powerful follow-up to its Le Potato SBC, the “La Frite SBC. The La Frite SBC is a small version of the Le Potato SBC, that has a quad -A53, HD-only Amlogic S805X, a Raspberry Pi A+ footprint and GPIO connector, and mainline Linux support. The 64 x 55mm La Frite is roughly modeled on the 65 x 56mm Raspberry Pi Model A+. The new board has a different layout and more real-world ports than the Pi model A+, although it has a similar 40-pin expansion header like the A+. 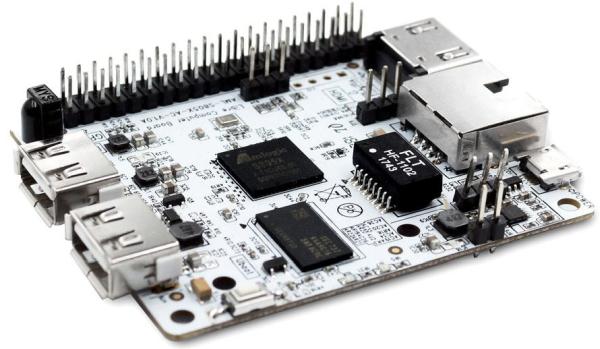 The La Frite comes in different configurations, that starts at just $10 or $15 for models with 512MB or 1GB DDR4, respectively. Fully fitted models with 8GB eMMC, HDMI cable, and a 2.5A power supply with LED and power button go for $30 or $35. Shipments will start in November 2018. The La Frite is powered by a 1.2GHz S805X version of the quad-core, Cortex-A53 Amlogic S900. This is lower power, compared to the 1.5GHz S905X model found on Le Potato. The SoC has the same Mali-450 GPU but is limited to 1080p video encode and decode rather than 4K on Le Potato.

Other features include a low-profile 10/100 “Fast” Ethernet port plus 2x USB 2.0 ports and a micro-USB OTG with power input. The display port is listed as HDMI 2.0 port on the product page but listed as HDMI 1.4 port on KS. There’s also an IR receiver, but for WiFi connectivity you have to use one of the USB ports.

La Frite supports Ubuntu, Debian, LibreELEC, Lakka, RetroPie, Android Oreo, other Linux based distributions. Libre Computer has collaborated with BayLibre, which recently demonstrated a hardware accelerated codec running on Chromium through the V4L2 Linux subsystem on Amlogic’s S900. This means Soon, Le Potato and La Frite will be able to play H.265, H.264, and VP9 content on upstream Linux with Chromium for the first time.

The La Frite SBC also support Arm’s upcoming EBBR (Embedded Base Boot Requirements) boot specifications for the ARM64 kernel, which defines a part of UEFI that can be applied with upstream U-Boot. La Frite includes 128Mb of SPI NOR flash to enable booting of Linux with EBBR. This will likely give room for “customized booting of upstream Linux from various sources including USB flash drives, USB hard drives, and PXE.” The SBC is also equipped with a U-Boot button.

Specifications listed for La Frite include:

Recently the hobbyist market has seen the appearance of the Air602 low-cost ARM WiFi module. This module might be a potential...