Introduction:
Our final project is a musical water fountain loosely based on the fountain in front of the famed Bellagio hotel and casino. The basic idea of the project is to take an input from an iPod (or any sound source), sample the sound and break it down to different “sequencies” by Walsh Transform , then use the output to turn on various solenoid valves. We first used a two-stage low pass filter, and then performed Fast Walsh Transforms on the sound source to split the sounds into different frequency ranges.   Each different range will correspond to a different valve which comprises a musical water fountain operating to the beats and rhythms of the song. 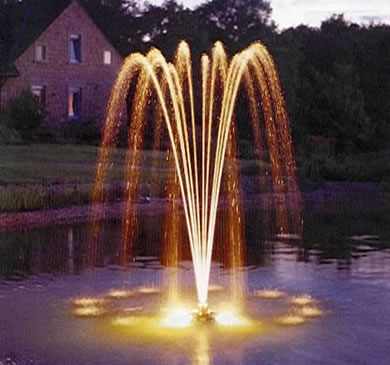 A three stage adapter screws into the faucet connection and reduces it to 3/8’’ ID poly tubing. This tube is then sent into a port on the back of our container. Figure 10 is a diagram showing how water is distributed to the eight valves. After the first T splitter, the tubing is reduced to 3/16’’ ID. This size is based on the adapters and splitters we were able to sample free of cost. We also felt that since the input 3/8’’ tubing is being split eight ways, reducing the tube size would help maintain water pressure, which was an ongoing concern. The design is fairly straightforward – coming in with single tube, the water is divided using T splitters into 2, 4, and then 8 different connections. All T splitters and connections to the valves are quick connect fittings, which as the name states are much easier than using barbs and hose clamps. At first we were concerned, but the quick connect fittings are strong enough to handle our water pressure, and we had no leaks from these at any point during testing.
The valves used in our project are 3-way, which was not our original design. We originally planned on having 2-way valves, and a separate, single outlet control for the water in case all valves are off. However for these 3-way valves when a voltage is applied, any water being pumped to the input is sent out the third port. Another set of quick connect adapters is screwed into these outlet ports and connected in similar fashion to the inputs, with a separate outlet tube for each set of four valves. This system adequately handles water and prevents leaks when water is on, but all valves are turned off.
Another decision we had to make was how to secure the valves to our plastic container, ensuring that only the output tip would be outside the container. Each valve came with an adapter screwed on the top output port (see Figure 10). We decided to cut a hole in the top of the container small enough that the tip of the valve would stick through the lid. Then screwing the adapter on from the outside locks the valve into place. Eight equally spaced holes were measured and marked, and the eight valves fit in the container perfectly. At first we were unsure how to cut the holes in the lid, since the plastic can shatter when cut. Based on a suggestion from Professor Land, we heated a nail and used it to burn the holes in the lid. After using a knife to clean up the edges, we had eight properly sized holes to secure the valves onto the lid. The benefit of this setup is that no additional adapters or tubing are needed in order to visibly shoot water from the container.