“Hello,
I am interested in a race car logger than will be able to display and log crucial information during autocross and track events. I am interested in tracking vehicle speed, RPM, engine coolant temperature and lateral g-forces. Ideally, the data can be stored on a SD card which can later be read on a computer. An LCD display showing two or more parameters will be extremely useful during the events so the status of the car can be determined in real time. The car that this will be used in is a 1997 E36 M3.

The TrckrX is an On-Board-Diagnostics (OBD-II) compliant device that provides the driver with instantaneous vehicle speed, RPM and coolant temperature. The above mentioned parameters are displayed on a LCD. In addition, few extra parameters such as a time stamp and lateral g-force are stored on a SD card.

Autocross is a form of motorsports that emphasizes active participation and at the same time safe competition since there is only one car on the course during a run. This is what makes it different from road racing or oval racing. There are no wheel-to-wheel racing and no physical obstacles which constitutes for low potential of car damage. This is one of the main reasons why most participants take their “daily drivers” to autocross events. It is considered as an inexpensive sport. Car clubs reduce the entry barriers further by introducing different classes. Autocross is an entry level motorsport which provides a stepping stone for drivers looking to move into other more competitive and possibly expensive forms of motorsport including rally and circuit racing where vehicle specifications are even higher.
In North America, autocross events are usually held in large paved areas like parking lots or airfields. Usually, new courses are created for each event so drivers must learn a new course each time they compete. National organizations such as the Sports Car Club of America (SCCA) and National Auto Sport Association (NASA) sponsor autocross events throughout the United States.
For this objective, TrckrX is an ideal aid for the average autocross participant who wants to monitor his vehicle real-time and then analyze it further with the aid of computational and graphing software such as Excel. The OBD-II standard provides access to numerous sensors that the vehicle uses to maintain proper functionality. TrckrX is able to utilize that and an additional accelerometer sensor to measure lateral acceleration.

In the beginning of the 1970’s, in order to comply with the Environmental Protection Agency (EPA) emission standards, manufacturers turned to electronically controlled fuel feed and ignition systems. Sensors measured engine performance and adjusted the systems to provide minimum pollution. These sensors were also accessed to provide early diagnostic assistance. This was the dawn of on-board diagnostics (OBD). Through the years OBD systems have become more sophisticated and in 1996 the Society of Automotive Engineers (SAE) established a standard connector plug (Figure 1) and set of diagnostic test signals. This became known as OBD-II.
Diagnostics have found value in vehicle servicing and repairs. Diverse diagnostic techniques are used in production line vehicles. There are currently five signaling protocols in use with the OBD-II interface. Every vehicle has one of these protocols. It is often possible to determine the specific protocol by merely examining the pin-out of the J1962 connector or by knowing the vehicle’s manufacturer.
In order to communicate over OBD-II, all devices use Parameter IDs (PID) requests to retrieve the needed information. PID codes are part of SAE standard J1979, which was implemented in all cars sold in North America since 1996. There are ten modes of operation in the latest OBD-II standard.
There are three major parts in the design of the TrckrX project that needed to be addressed. The first module is the OBD-II vehicle, followed by an OBD-II compliant reading chip. Lastly, analyzing and displaying of the information to driver is implemented using an Atmel 8-bit ATmega644 microcontroller and a LCD.

READ  Turn Your Arduino Into an ISP

The TrckrX requires the OBD-II standard making it complaint to vehicles manufactured after 1996. Although five different signal protocols exist all cars since 2008 in North America use the ISO 15765 CAN bus signal protocol, minimizing the likelihood of encountering the other four protocols. During the developing of the TrckrX an ECU simulator board will be introduced, the ISO 15765-4 ECUSim 2000 OBD-II Simulator from OBD Solutions.
The project was designed and tested to work on BMW’s OBD-II Signal Protocol – ISO 9141. The specific car model is E36 BMW M3.

There are various off-the-shelf OBD-II communication integrated circuits. The TrckrX is utilizing microOBD 200 (PIC24 microcontroller) which is designed around the STN1120. MicroOBD 200 is a quick and easy way to add OBD support to any project. The STN11xx chip itself is an enhanced version of the popular ELM327 chip. It is the world’s smallest, lowest cost multiprotocol OBD to UART interpreter IC. It provides an easy means of accessing hundreds of real-time parameters. The STN1110 outperforms the original ELM327 IC in every category: stability, performance, and features.

The final, and most essential, feature of the project is the actual processing and display of the received information. For this purpose, the ATmega644 MCU is utilized. It handles the communication between the vehicle’s ECU via the OBD-II interpreter IC. The communication is done over UART. In addition, to reading all the specific PID codes for vehicle speed (VSS), RPM, engine coolant temperature an external accelerometer was added. It provided readings of lateral acceleration. The MCU also handles the logging of the data on a SD card in format that can be easily read on a personal computer.

The development of the TrckrX started with ordering all the necessary components. Some parts were already present; other still had to be ordered. The microOBD 200 IC and the ECU simulator were available since my MEng project shared the same components and with the permission of Pr. Land, I was able to incorporate the two into my work. Although I had sufficient previous experience with the OBD-II standard, making the UART communication between the ATmega 644 and the microOBD IC to work was not an easy task. Thanks to Avi Aisenberg and Mike Andromalos, and their OBD-II project in ECE 4760 back in 2009, this task was a bit simplified.
The whole project was designed incrementally. First phase was the OBD communication followed by the accelerometer readings. Last was the SD card logging.

The development of the TrckrX started with ordering all the necessary components. Some parts were already present; other still had to be ordered. The microOBD 200 IC and the ECU simulator were available since my MEng project shared the same components and with the permission of Pr. Land, I was able to incorporate the two into my work. Although I had sufficient previous experience with the OBD-II standard, making the UART communication between the ATmega 644 and the microOBD IC to work was not an easy task. Thanks to Avi Aisenberg and Mike Andromalos, and their OBD-II project in ECE 4760 back in 2009, this task was a bit simplified.
The whole project was designed incrementally. First phase was the OBD communication followed by the accelerometer readings. Last was the SD card logging.
Most challenging of all was to setup the two microcontrollers to communicate synchronously at the correct baud rate, followed by the SD card logging.
It turned out that the OBD-II communication has to run at full rate i.e. 16Mhz for the standard crystal used in ECE 4760. Otherwise the response characters will not be read properly and the system will stall. In addition, a set of software filters were developed to distinguish the responses from the ECU.
The principle behind OBD-II communication is pretty straightforward. A OBD-II device sends a request to the vehicle ECU called Parameter-ID (PID) code and receives a response right back. There are different modes of PIDs but the one the TrckrX is focused on is real-time data. A PID code by its nature is a combination of HEX numbers and the response is also in HEX. Some PID codes like MAF, RPM and coolant temperature are in two byte response where vehicle speed is a single byte value from 0 to 255. For more information on PID codes visit this Wikipedia article.
After that milestone was completed, the rest was pretty straight forward as far as data extraction goes. The accelerometer used was MMA1260D, which was extensively used by many other projects in the class and setting it up was not an issue. Initially a separate code was developed which only took a peak “g” value.
The SD card interface took a substantial amount of debugging time. It utilizes FatFS file system which is essentially a FAT16. The advantages are that it has much less overhead compared to FAT32 and works straight forward with the AVR architecture. 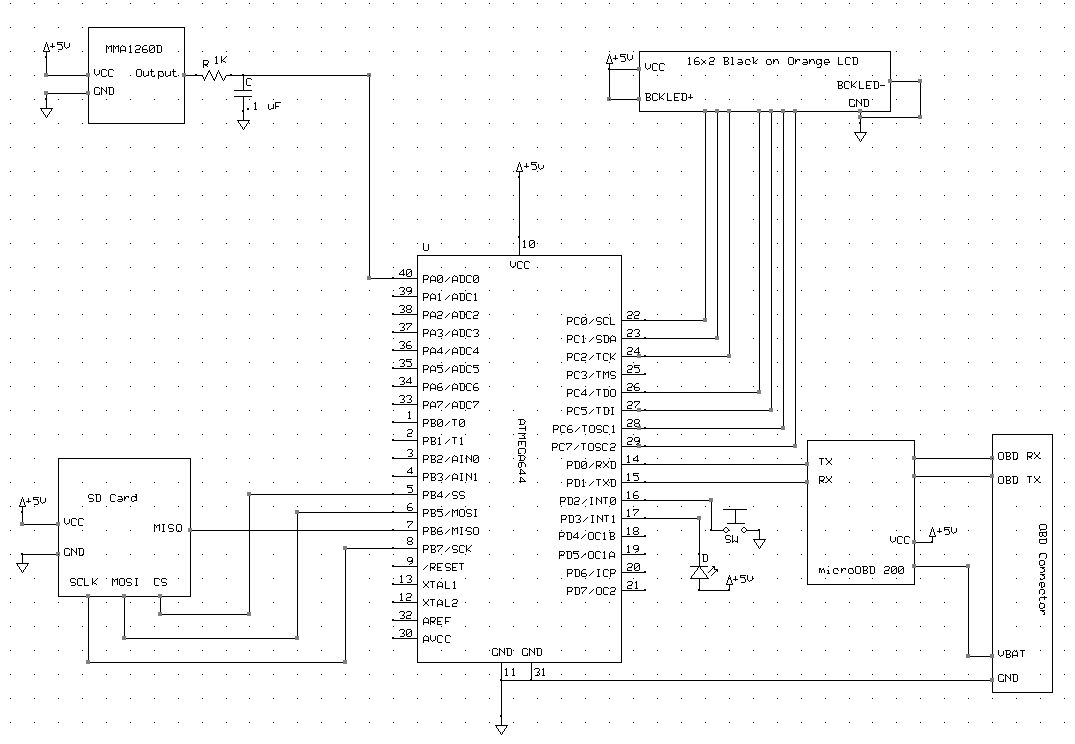 Thanks to the numerous project that have used SD card logging and the creator of the FatFS, I was able to fully understand the theory behind the software and the hardware interface. However the later wasn’t so straightforward. After several hours (read triple digit hours) of testing and trying out different circuits, I arrived at the conclusion that the LM2951 voltage regulator 3.3V is causing the whole circuit to go out of spec. It was proven that the LM2951 destroys PIN B.4 which is the chip select (CS) for the SPI mode to the extent that you can use straight wires and power your SD card with 5V. It seemed like the Snorerecorder from Jimmy Da and Aaron Meller has experienced the same exact problem.
Due to the fact that I was aiming for early finish of the project, mainly because we had an Autocross event 2 weeks earlier than my demo slot, I had to have the device ready for April 22nd!
Once this module was complete it was time to put the whole source code together. This part wasn’t hard at all since all the components were working independently and it was a matter of time to put them together to produce the TrckrX. The state flow diagram below represents the source code.

The bushmeat market in the city of Malabo is bustling—more so today than it was nearly two decades ago, when...