Introduction
The goal of our project was to replicate the great arcade classic Pac-Man on television in black and white. The inspiration for this project came from our love of video games and our introduction to NTSC TV signal generation in Labs 3 and 4. We chose Pac-Man because it is a widely recognized classic and definitely a worthy game to try and emulate. 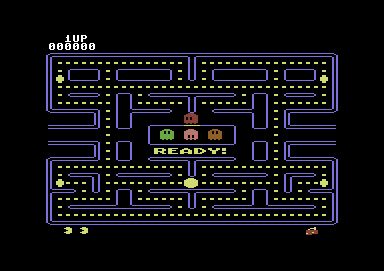 The goal of the game is to have Pac-Man collect (eat, chomp, etc.) the dots or pills scattered around a maze. There are four ghosts named Blinky, Pinky, Inky, and Clyde that float around and sometimes chase Pac-Man. Their touch is lethal but if Pac-Man consumes a megapill, the tables are turned for a little while and Pac-Man can eat them. This is the basic idea of the original Pac-Man game.
There are so many different versions of the original Pac-Man, not even counting offshoots from the virtually identical Ms. Pac-Man to the completely different 3-D Pac-Man World. The versions differ in the colors, ghost behaviors, levels available, and more. We needed a standard to stick to and the Commodore 64 version was the most readily available. Emulators for the venerable 1982 home computer system are plentiful on the internet, as are roms of the thousands of games written for the system. Our goal would be to replicate as closely as possible a black and white version of the Commodore 64 game Pac-Man released by Atari in 1983. 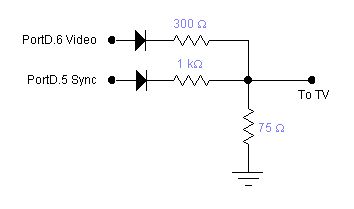 We used an Atmel AT90S8515 microcontroller and a simple video DAC to produce our Pac-Man game on any television with composite inputs.

Introduction Our final project is the classic Atari version of space invaders on the MEGA32. The story: A horde of...