My microcontroller-powered prime number generator/calculator is virtually complete! Although I’m planning on improving the software (better menus, the addition of sound, and implementation of a more efficient algorithm) and hardware (a better enclosure would be nice, battery/DC wall power, and a few LEDs on the bottom row are incorrectly wired), this device is currently functional therefore theoretically complete (I met my goal). This entry will serve as the primary reference page for the project, so I will provide a brief description of what it is and what it does. First, here’s a picture of the device in its current state (click to enlarge): 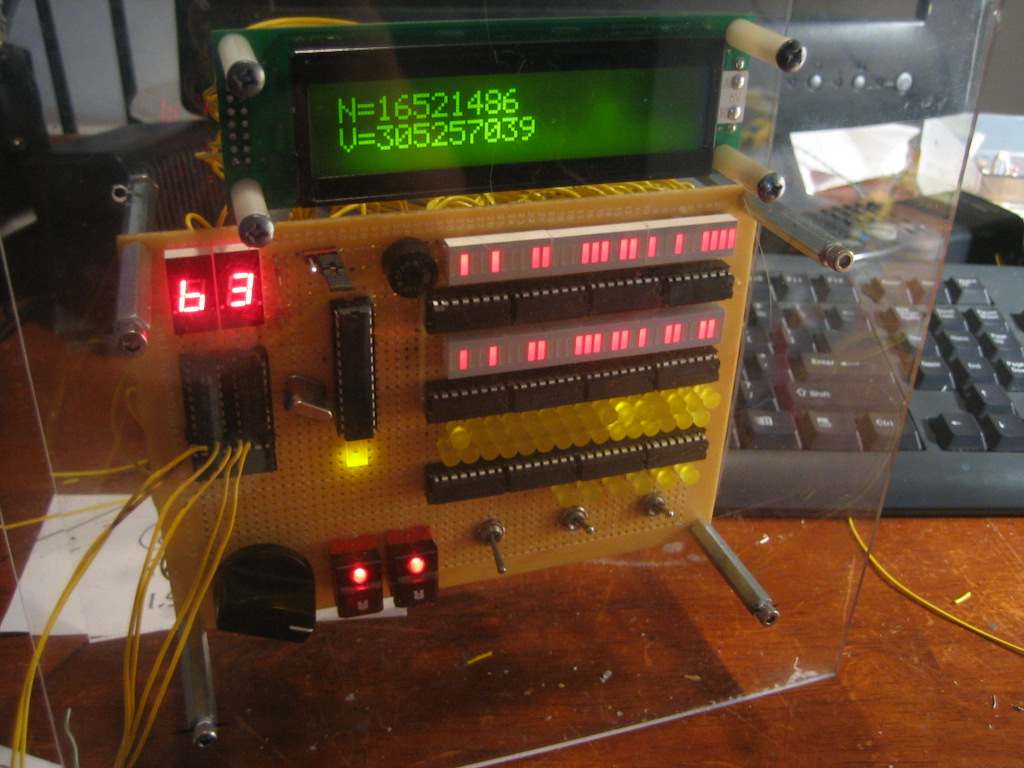 BRIEF DESCRIPTION: This device generates large prime numbers (v) while keeping track of how many prime numbers have been identified (N). The 5′th prime number is 11. Therefore, at one time this device displayed N=5 and V=11. N/V values are displayed on the 20×2 LCD. In the photo, the 16,521,486th prime is 305,257,039 (see for yourself). The LCD had some history. In December, 2003 (6 years ago) I worked with this SAME display, and I even located the blog entry on November 25′th, 2003 where I mentioned I was thinking of buying the LCD (it was $19 at the time). Funny stuff. Okay, fast forward to today. Primes (Ns and Vs) are displayed on the LCD, but what’s with all those other LED lights? I’ll tell you: 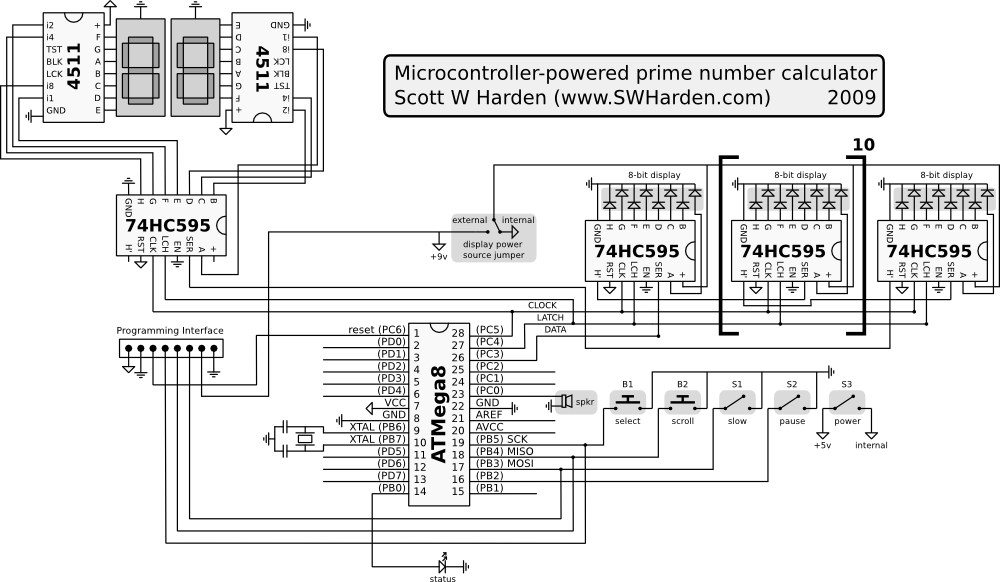 In short, each row of LEDs displays a number. Each row of 30 LEDs allows me to represent numbers up to 2^31-1 (2,147,483,647, about 2.15 billion) in the binary numeral system. Since there’s no known algorithm to generate prime numbers (especially the Nth prime), the only way to generate large Nth primes is to start small (2) and work up (to 2 billion) testing every number along the way for primeness. The number being tested is displayed on the middle row (Ntest). The last two digits of Ntest are shown on the top left. To test a number (Ntest) for primeness, it is divided by every number from 2 to the square root of Ntest. If any divisor divides evenly (with a remainder of zero) it’s assumed not to be prime, and Ntest is incremented. If it can’t be evenly divided by any number, it’s assumed to be prime and loaded into the top row. In the photo (with the last prime found over 305 million) the device is generating new primes every ~10 seconds. Not bad! Let’s discuss technical details.
I’d like to emphasize that this device is not so much technologically innovative as it is creative. I made it because no one’s ever made one. It’s not realistic, practical, or particularly useful. It’s just unique. The brain behind it is an ATMEL ATMega8 AVR microcontroller (What is a microcontroller?), the big 28-pin microchip near the center of the board. (Note: I usually work with ATTiny2313 chips, but for this project I went with the ATMega8 in case I wanted to do analog-to-digital conversions. The fact that the ATMega8 is the heart of the Arduino is coincidental, as I’m not a fan of Arduino for purposes I won’t go into here).
For more detail: Prime Calculator is Complete using ATMega8 Microcontroller

LED Dog Collar So this is a pretty simple project, but I thought it was a clever idea. I have...