Our project recreates the experience of playing an acoustic guitar electrically using vibration sensors, push buttons and the Karplus-Strong algorithm.
Our basic idea is to model an acoustic guitar as closely as possible and then implement additional functions not available to the conventional guitar. This includes allowing the play of the guitar with sound being output to earphones, allowing for practice without disturbing others, as well as a chord-learning mechanism based on LED-signalled instructions and other functions. 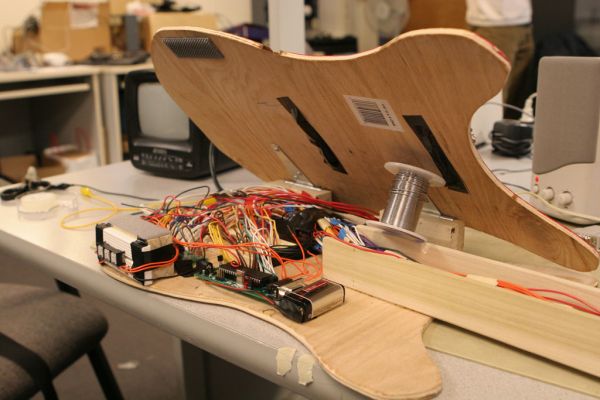 A close modeling would mean that we use push buttons to simulate actual depressing of strings at specific fret locations, calibrate vibration sensors to detect strumming of guitar strings, and faithfully recreate a representation of the guitar body. For the production of guitar strumming sounds, we used the Karplus-Strong algorithm that synthesizes a plucked string sound signal.

Rationale/ Sources for Project Idea
Our final project idea originated from the initial idea of creating a self-playing automated guitar. That idea was scrapped after some consideration due to the mechanical complexity and equipment involved, and hence we opted for a more electronic solution to the idea of a project involving a guitar.
We decided to accurately model an acoustic guitar that would output sound signals based on the Karplus-Strong algorithm for the plucked string signal synthesis. The guitar should essentially be a recreation of the acoustic guitar, but with additional features that would otherwise be impossible in the conventional guitar. To accurately model an acoustic guitar, we would require a somewhat realistic simulation of fretting and plucking of the strings, as well as to create a semblance of the acoustic guitar body. The Karplus-Strong algorithm produced sound should also resemble closely the sound of the actual acoustic guitar. Also, we required our final product to be portable and not too heavy, which would then influence the design and electrical components of our final guitar.
In terms of additional features, we first decided that the sound could be output to speakers or to earphones, to allow the option of silent practice sessions that would not of nuisance to others. Also, we decided to implement a fret-position signaling system which would allow amateur players to learn chord positions quickly and be able to familiarize themselves with songs written with guitar tabs efficiently. In a sense, one could be adding tabs of new songs they want to play whilst connected to the computer and then unplug and be able to freely play chords from one particular song.
Background Math
The Karplus-Strong Algorithm was developed by Kevin Karplus and Alex Strong in 1978 and consists of a high-order digital filter representing the string as well as a short noise burst, corresponding to x(n) that is initialized in the delay-line, which represents the plucked excitation. This is represented in the figure shown below.

H_a(z) is a low pass filter, and alpha corresponds to a loss factor which essentially determines the decay time of the tone, and has to be less than 1 for filter stability. H_b(z) represents a delay line, whose length N determines the pitch frequency of the tone. By simple calculations, we can obtain the loop length of the entire system to be N + 1/2 samples. Since the low pass filter is constantly changing the contents of the loop, the output signal is only close to periodic. Nevertheless, using the term loosely, we can easily see that the period of the output signal would be the effective loop length.
READ  Point of Sale Terminal Using Atmega644

Introduction Using computer vision and rules for a perfect tic tac toe game, we have built a system that would...