One of the relatively unexplored topics in this week’s lecture was USB, the ubiquitous protocol that allows computers to communicate with peripheral devices (containing microcontrollers). Creating a USB device allows any computer to talk to it without the specialized software and hardware we’ve been using so far. For these two weeks, I decided to understand the requirements to create USB-compatible device circuits and write the necessary software for a computer to talk to them.
This is an epically long post about creating a USB device from scratch and programming it.

In the class inventory, we have a couple of devices with hardware USB support: the ATmega16U2 and the ATXMEGA16A4U. Because LUFA support for the XMEGA AVRs is currently not well-supported, I’ve opted to go with the ATmega chip.
Given that we’ll use the ATMega16U2, what’s next? Well, it turns out that there aren’t many examples of USB device circuits for microcontrollers floating around online. Even the datasheet isn’t very specific about examples of application circuits. However, after a long search, I was happy to discover that the Arduino Uno revision 3 uses an ATMega16U2 chip as a USB to serial converter for the actual ATmega328p being programmed. Its schematic was very helpful as an example to build a basic circuit.
From various datasheets and other examples, I have found several things to be aware of when designing these circuits:

After the due diligence on the circuit engineering, I was finally ready to design the schematic. Because I was using some non-standard parts here, I found the Ladyada and Sparkfun Eagle libraries to be useful. In the circuit below, I’m using a 16MHz crystal in a HC-49 surface mount package, an ATmega32U2 – pin compatible with the ATmega16U2, and a USB A connector directly on the PCB.
The Eagle libraries also include supply parts which make it easier to create VCC and GND connections by dropping parts instead of naming nets. I strongly recommend this as a workflow! Note also the impedance matching signaling resistors, and the capacitors paired with the crystal, the values of which I borrowed from the Uno rev. 3 because of its similar configuration.
A power LED automatically lights up when the board is powered – a nice feature to have. The RGB LED in the circuit is attached to hardware PWM pins, so that it can be controlled with full color by setting the corresponding PWM rates. 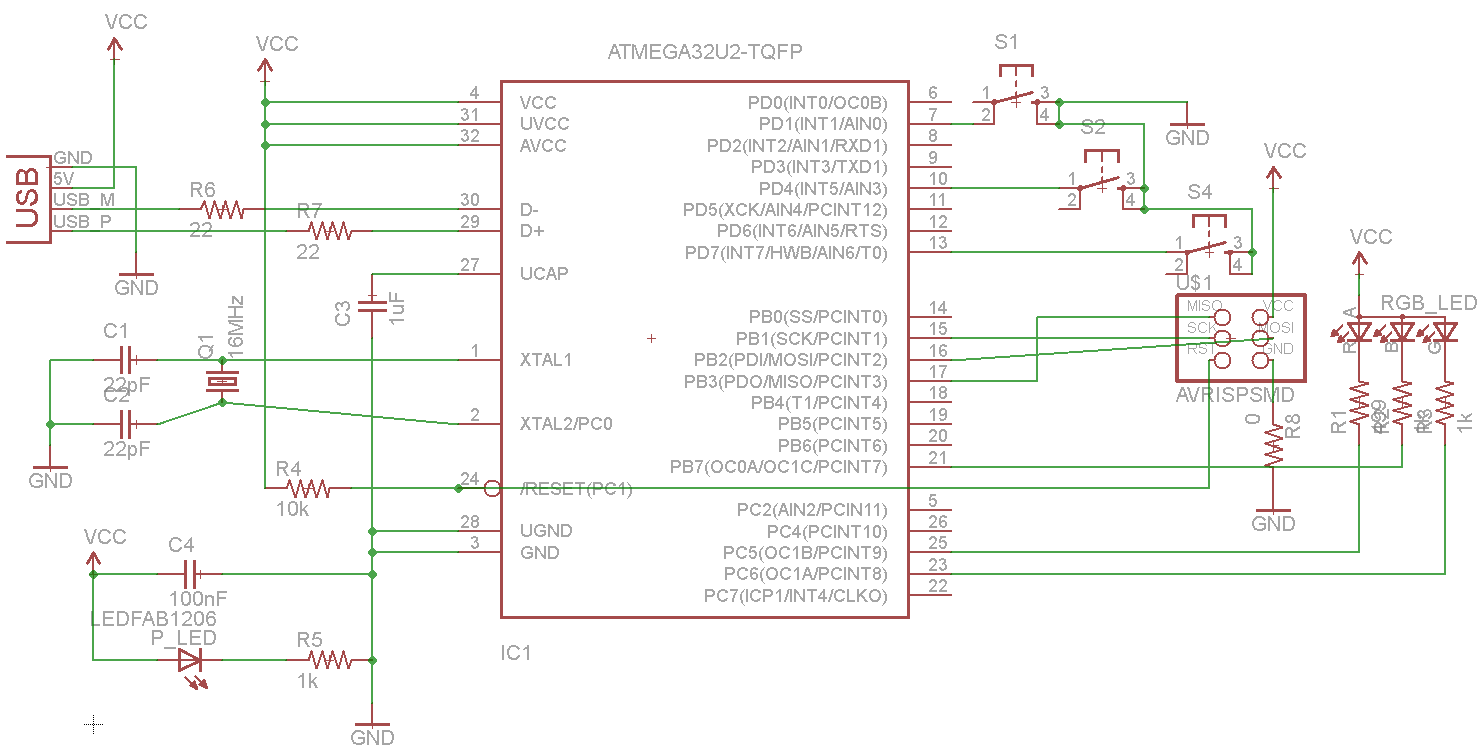 The mega16U2 comes in a TQFP32 package, similar to the mega328P. Compared with the pins on the tiny44 and tiny45, they are much closer together and smaller. In order to mill traces for them, one will either need to use a 10 mil end mill, or edit the pads to allow for more space with them. Given the overall stress caused to the class from 10 mil end mills, I decided to edit the pads to so that I could mill the board with the normal 1/64” end mill. Note that this makes the pads narrower than the pins, so soldering will be harder.
To change the pad size, you can just open the library in Eagle and use the following menu. Here, I’ve changed the TQFP32 package’s pads from 0.16 x 0.05 to 0.14 x 0.06 – slightly thinner, but longer. In routing the board, I used 0.14” routes when connecting to all of the pads, and widened them to the 0.16” routes as soon as they left the vicinity of the microcontroller.
This is the board, all laid out. My original design had many more LEDs and switches, but it turned out I had bit off much more than I could chew – or lay out on a single-sided board. I removed many of the extra parts, and settled on three switches and one RGB LED. After many hours of routing, I came up with this compact, symmetric design using the integrated USB connector. It’s a pity that the mega16U2 doesn’t have any ADC hardware, or I would have added several sensors to read later via USB.
Here’s the result of milling the board. Note that there are some traces pulling off in the center of the board, which is less than ideal. This board was exported at 1200 DPI, but that still wasn’t enough for the very fine detail in the middle – the microcontroller pads and traces should only be slightly narrower than normal, but they appear to be significantly narrower in some spots. If I were to do this again, I’d export at an even higher resolution.
Although I used 6 offset paths instead of the normal 4, there are still copper traces around the edge of the board. This is a problem around the USB connector, where we don’t want to be shorting random pins to each other. I shaved these unwanted copper parts off with an X-acto knife.
I tested the board out in a USB socket and read the pin voltages, just to make sure the connector will work: 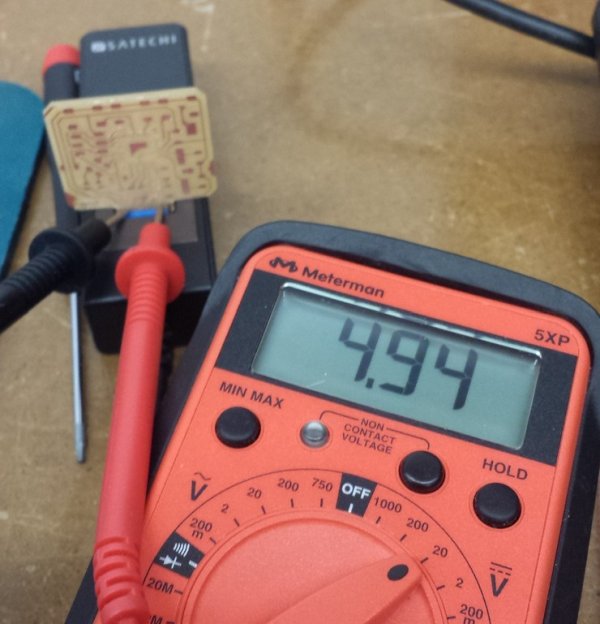 Introduction Contents [show] In this tutorial, you’ll learn how to control a DC motor’s direction using an H-bridge. To reverse...