4 Channel 2 core twisted pair remote controller built using PT2262, PT2272-M4 IC from Princeton technology and MAX485 IC from Maxim. PT2262 is an Encoder (Transmitter), PT2272-M4 Decoder (Receiver) and MAX485 works as bridge for twisted pair communication between encoder and decoder. The receiver provides 4 channel Momentary outputs. All outputs are TTL level and can be interfaced with other circuits or relay board. Transmitter works with 5V to 12V DC. Receiver works with 5V DC. 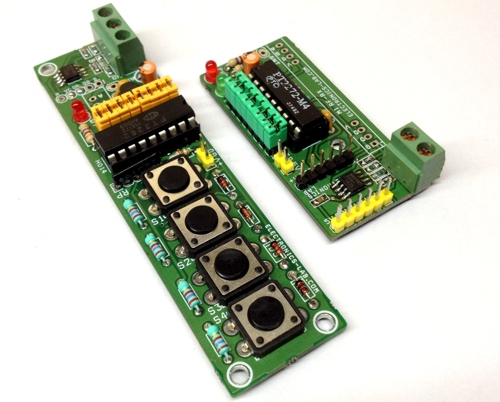 When any of SW1-SW4 (S1-S4) tact switches is pressed, power is applied to encoder IC and RS485 IC, the encoder starts scanning Jumper J1-J8 and transmitting the status of the 8 bits address and data serially. The decoder IC receives the data from MAX485 and compares it two times with J1-J8 address jumpers, also provides outputs high and at same time VT (Valid Transmission)  LED goes On, if the data is Valid and address of Transmitter and Receiver are same. It is important to have same jumper settings J1-J8 at transmitter and receiver to pair both.
Encoder – Transmitter (PT2262)
PT2262 is a remote control encoder paired with PT2272 utilizing CMOS technology. It encodes data and address pins into a serial coded waveform. Circuit uses 8 bits of tri-state address pins providing up to 6561 address codes, thereby, drastically reducing any code collision and unauthorized code scanning possibilities.
PT2262 encodes the code address and data set into special waveform and outputs it to the DOUT when TE is pulled to low. The wave fed to RS485 IC for transmission. The transmitted RS485 IC data receive by receiver side of RS485 and PT2272 decode the waveform and set the corresponding output pin high. Thus completing a remote control encoding and decoding function.
Decoder Receiver (PT2272-M4)
PT2272 decodes the waveform received and fed in to the DIN pin. The waveform is decoded into code word that contains the address, data and sync bits. The decoded address bits are compared with the address set at the address input pins. If both address match for 2 consecutive code words, PT2272 drives the data output pins whose corresponding data bits is the decoded to be a 1 bit, and (2) the VT output — to high state.
VT (Valid Transmission)
When PT2272 receive a transmission code word, it initially checks whether this is a valid transmission. For a transmission to be valid, (1) it must be complete code word, and (2) the address bits must match the address setting at the address pins. After two consecutive valid transmissions, PT2272 (1) drives the data pins according to the data bits received, and (2) raises VT to high state.
NOTE: J1 to J8 Jumper provided at Bottom layer of the PCB to set the address pins high. Top side of the PCB has Jumpers. Close them to set the address pins low for J1 to J8.
Read more: 4 channel RS485 Remote Controller