The goal of this project was to design and build a ‘gaming’ device capable of levitating a ping pong ball at varying heights based on the proximity of the user to the device. The project based on ATMega16 microcontroller.
The project incorporates a fairly complex mechanical system and utilizes many features of the ATmega platform including Analog-to-Digital conversion, SPI communication, Pulse Width Modulation, and real-time task scheduling. The designers, both electrical engineers, wanted to break the norm and build something more physically complex as the project involved a lot of physical construction, using materials like wood and Plexiglas. The game is intended to require significant physical motion on behalf of the participant, in the style of a Wii or Microsoft Kinect game. 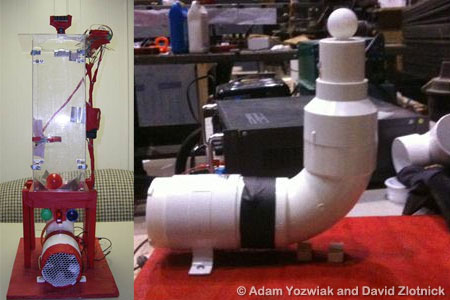 The true inspiration for this project was derived from a future project the designers intend to build in their spare time, during senior week. This project, a pneumatic, range-sensing soda can launcher will utilize the same sonar sensor and 7-segment display featured in the levitation game. Taking into account ABET criterion for senior design projects, the soda can launcher was tabled, and the levitation game was designed originally utilizing compressed air to levitate the Ping-Pong ball. A valve capable of regulating the output pressure of a compressed air tank proved too costly for the budgetary constraints of this project, and therefore several blower motors were tested for their adequacy based on their air volume movement ratings (CFM).
For more detail: AVR Ultrasonic Spheroid Levitation Device using ATMega16 microcontroller

AvrPhone is ATmega128A-based simple mobile phone with touch screen and SIM100S GSM module. The display uses 2,4″ LCD with a...