Posted By: Adminon: April 16, 2013In: How It WorksNo Comments
Print Email
Share this:

“Radio waves” transmit music, conversations, pictures and data invisibly through the air, often over millions of miles — it happens every day in thousands of different ways! Even though radio waves are invisible and completely undetectable to humans, they have totally changed society. Whether we are talking about a cell phone, a baby monitor, a cordless phone or any one of the thousands of other wireless technologies, all of them use radio waves to communicate. 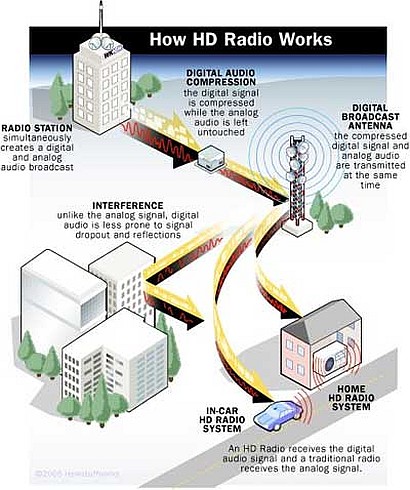 Here are just a few of the everyday technologies that depend on radio waves:

The list goes on and on… Even things like radar and microwave ovens depend on radio waves. Things like communication and navigation satellites would be impossible without radio waves, as would modern aviation — an airplane depends on a dozen different radio systems. The current trend toward wireless Internet access uses radio as well, and that means a lot more convenience in the future!
­The funny thing is that, at its core, radio is an incredibly simple technology. With just a couple of electronic components that cost at most a d­ollar or two, you can build simple radio transmitters and receivers. The story of how something so simple has become a bedrock technology of the modern world is fascinating!
In this article, we will explore the technology of radio so that you can completely understand how invisible radio waves make so many things possible!

Radio can be incredibly simple, and around the turn of the century this simplicity made early experimentation possible for just about anyone. How simple can it get? Here’s an example:

Your battery/coin combination is a radio transmitter! It’s not transmitting anything useful (just static), and it will not transmit very far (just a few inches, because it’s not optimized for distance). But if you use the static to tap out Morse code, you can actually communicate over several inches with this crude device!

For more Detail: How Radio Works