“An encrypted laser-based friend-foe identification system to prevent friendly fire in battle”
This project implements an Identification Friend-or-Foe (IFF) system for use by soldiers to prevent friendly-fire. The inspiration for the project is derived from Identification Friend-or-Foe (IFF) transponder systems currently used on fighter aircraft and military vehicles. Fighter aircraft fitted with an IFF system transmit a coded radio (RF) message to other aircraft detected within a pre-set range. Friendly aircraft can decrypt the RF message and provide a correctly encrypted response to prevent fratricide. 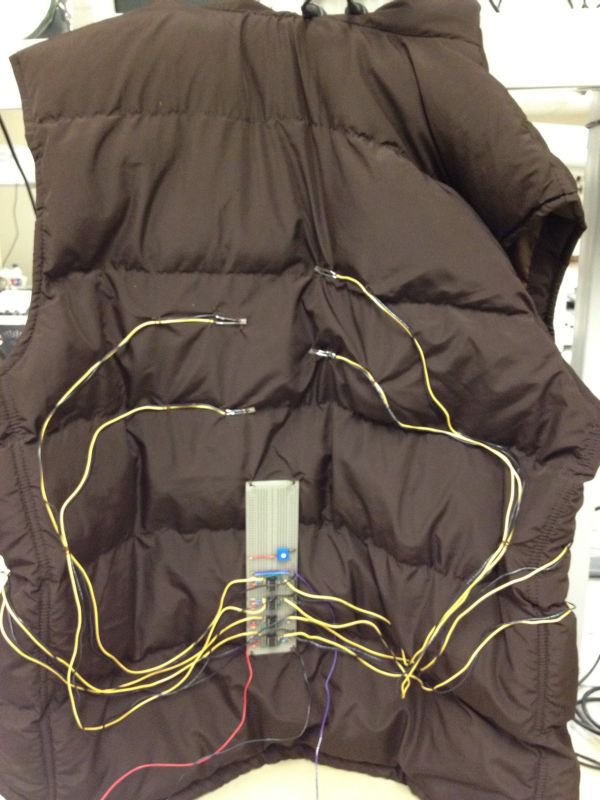 Each soldier’s rifle is fitted with a laser that sends out an IFF query. If a friendly soldier is in the line of sight of such rifles, the IFF system produces a feedback signal. This signal can be used to generate an audible/visual warning, or to momentarily jam the rifle.

Incidents of friendly fire have been responsible for numerous casualties amongst soldiers. Such incidents, caused by a variety of reasons including miscommunication and aggressive battle tactics, represent an opportunity to minimize the human cost of war. NATO forces in Afghanistan have encountered a more sinister form of friendly fire in the form of disgruntled Afghan soldiers or disguised Taliban militants. Afghanistan’s Soldiers Step Up Killings of Allied Forces, an article published in the New York Times on January 20, 2012 provides a more detailed description of the problem. Our IFF system applies a tested method of preventing friendly fire in a new scenario, and has the potential to save lives.

The grayed boxes in Figure 1 are parts of the system implemented in software on a microcontroller unit (MCU). The white boxes are implemented in hardware. A soldier equipped with the IFF system has a responder unit on their body armor, and an initiator unit mounted on their rifle. The rifle module uses a laser to transmit an encoded message – the IFF query. If the rifle points toward a friendly soldier, phototransistors mounted on the target soldier’s body armor will detect an incident laser beam. An MCU in the responder unit will decrypt the laser message using a pre-set private key. If decryption is successful, the MCU identifies which friendly soldier is currently aiming at the target soldier, and broadcasts this information in RF. RF receivers in the initiator units of all friendly soldiers within firing range parse this information to determine if the rifle they are mounted on is pointing toward a friendly soldier. If potential fratricide is detected, a buzzer mounted on the rifle goes off, signaling that the current rifle position might result in friendly fire. This feedback signal used to trigger the buzzer may also be used to prevent the next round from being loaded in the weapon’s firing chamber.
The IFF system has two major fault cases:

Our initial design concept used a directed RF signal on the rifle instead of a laser to transmit the IFF query. Using an RF signal would have made encryption easier. If the RF signal transmitted from the rifle was sufficiently directional, the IFF query would have been sent only to RF receivers in the line of the rifle’s fire. This scheme would allow IFF queries to be sent to soldiers who were in the rifle’s line of fire, but not line of sight because they were blocked by an opaque object like a door.
We explored a ‘cantenna’ and custom axial mode helical antennas to produce a sufficiently directed RF signal. Helical antennas were too expensive to be viable for mass deployment, and the cantenna failed to attenuate the RF signal sufficiently in directions other than the line of fire. We decided that the inherent coherence and collimation of a laser compared to a directed RF signal outweighed the disadvantage in encryption schemes.

The responder unit detects laser beams incident on a soldier’s body armor using phototransistors. In order to protect the entire back and torso of the soldier, the IFF system requires either a large laser beam or a lot of phototransistors on the armor. We chose to use a large laser beam to minimize the circuitry needed for the body armor. A large parallel laser beam could be generated by placing a concave lens followed by a convex lens after the laser. This approach preserves the collimation of the laser beam and increases the distance over which the IFF system can prevent friendly fire. The convex lens would have to be quite large, and therefore expensive to get a sufficiently wide laser beam. We use only the concave lens and sacrifice range in the prototype to decrease monetary cost.

We use a real time operating system to schedule tasks in the MCU software. Manual scheduling would allow quicker competition of software tasks. The relatively simple laser and RF communication, and slow time constants of human reaction and the human heart rate all make the speed of execution of the code less important. Hence we use the operating system to facilitate easy creation of tasks.

Each vest can have up to 50 phototransistors, depending on the sensor density desired. Although it might be possible to do a software-based polling loop, we decided to keep a minimal pin count by using diodes to build a simple OR-gate. This provides the advantage of allowing the gate output to drive an interrupt, which is more efficient than a polling-based method.

The Universal Asynchronous Receiver/Transmitter (UART) protocol forms an important part of our project, since we use UART to send signals to our wireless transceivers, which in turn enables cross-device communication. We also use it heavily while debugging the project by using the UART for serial communication over USB with a console on a PC. This enabled us to look at the internal state of the microcontroller throughout execution.

The IFF system uses a wireless module that transmits data on the 915 MHz frequency spectrum. Although it is used as a black-box component, we understand that it uses the Carrier Sense Multiple Access (CSMA) protocol to control wireless transmissions, and the wireless signal is encoded in a frequency-shift keying (FSK) modulation scheme. The wireless modules are compliant with international regulations, including FCC and ETSI.

The IFF system uses a 2.5mW Class 3A laser. According to the ANSI Z136 standard, lasers of this class can damage the retina if looked at directly for over two minutes. The beam diameter is less than 1 sq. cm, hence it doesn’t need protective eyewear for normal operation.

When a laser beam is detected on any one of the vest’s phototransistors, the hardware circuitry generates an interrupt on the INT0 pin. We use a software timer to keep track of the intervals between consecutive interrupts; every transmission module will have a unique interrupt interval to ensure that each module is identifiable based on the received signal. Since the interval detection is accurate up to 50 microseconds, we can assign each transmission module a unique millisecond interval. This makes false identification very unlikely. If the laser period falls within any of the valid ranges, the software recognizes that the user is in danger of friendly fire, and will transmit a wireless signal to the offending initiator module. The initiator module buzzes the user upon receipt of the signal; when the laser leaves the sensor and the calculated laser period changes again, the responder unit will send a “cease” signal to the initator unit to stop the buzzing.

We use a plethysmograph to ensure that the IFF system will be deactivated immediately upon separation from the user. Each pulse from the user generates an interrupt, which resets a software-based watchdog timer. If the timer count exceeds a predetermined amount, it indicates that the system has been detached and it will wipe the program memory to prevent fraudulent use by imposters. In our demo, we substitute the wiped-out state with an LED that turns and remains on (even after power cycling) to show that the system can perform as described, without us having to reprogram the target board every time this occurs.
The program memory can either be wiped with the chip erase command by setting the command byte to 1000 0000, or by overwriting program memory. 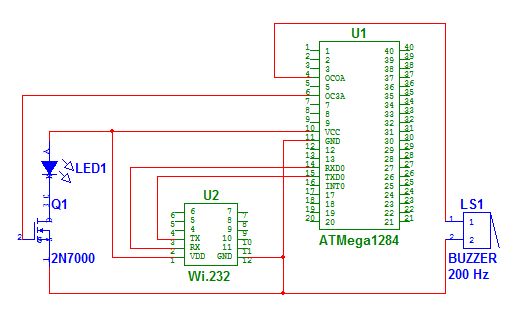 One limitation of the system is that friendly fire detection is done on a narrow electromagnetic spectrum. This means that multiple laser signals arriving at the same receiver will cause the signals to overlap and potentially generate an invalid registration, rendering the system not working. Although one option is to use a different part of the electromagnetic spectrum for each transmitting laser module, we quickly determined that it was too costly and unfeasible. One solution is to create a sparse signal, such that the laser is only activated once every few milliseconds. This ensures that when many lasers can be pointed at the receiver at once, each individual signal pattern will still be detected. Because the period between signal firings will differ across various transmit modules, we are confident that each signal will eventually have a period of time where it can register against the receiver. We can further improve collision management by having an exponential back-off period upon collision, similar to that in the CSMA protocol.

We use the TinyRealTime (TRT) kernel system to schedule our various software processes and ensure that deadlines are kept. This helps us abstract away the complexities in managing multiple tasks that need to execute while UART communication is ongoing. The TRT system also provides semaphores to ensure mutual exclusion when accessing shared resources such as the UART channel across different processes.

Our system is divided into two components – the responder unit and the initiator unit. Although each individual will be equipped with both the responder and initiator unit, they are functionally separate and do not interact with each other during normal operation.

The initiator unit generates a laser signal along the weapon’s line of firing. The microcontroller generates a PWM signal that operates a MOSFET switch, which in turn regulates the laser output. This creates a laser beam that appears to be steady to the observer, but is actually a very rapid series of pulses with an interval unique to each soldier.

Americans favor diplomatic and economic strategies over military involvement in foreign policy, according to a new national survey conducted by...