LaserSimon – An Innovative Take On An Exciting Game Using Atmega32

Our project was first inspired by our shared enjoyment of classic laser tag. We initially started out with a game in mind that entailed playing two player laser tag with remote-controlled helium blimps. Due to a number of logistical issues that came up while in the process of implementing our idea including difficulty providing necessary lift and an inability to produce adequate control over the blimps against inherent air currents indoors, we were forced to reformulate and thus LaserSimon was born. LaserSimon allowed us to use our existing radio control platform (described below) and materials in a more easily realizable setting. 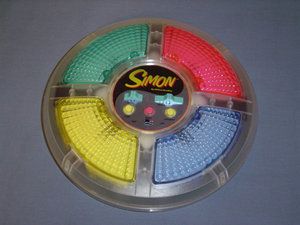 We utilized a commercially available laser pointer compliant with class IIIa laser power and safety specifications.It also complies with 21 CFR of the Center for Devices and Radiological Health (CDRH).
In the United States, OHSA and ANSI standards govern laser safety and personal protective equipment (PPE).
Moreover, the IEC 825 standard defines the maximum exposure limits of lasers and LEDs. The ANSI Z136-1 standard addresses the engineering and procedural controls necessary when using class IIIa lasers.
Compliance with these safety standards is crucial for the safe and successful development of the laser game and therefore were followed closely.
Additionally, the project utilizes RF transcievers to communicate between components. The transceivers operate in the 433 MHz UHF control band devoted to amateur radio. As such, they were required to be compliant with FCC Part 15 governing unlicensed RF devices. FCC Part 15 includes important information about RF interference and radio transmission power.
Lastly, Simon is a registered trademark of the Milton Bradley Company, a division of Hasbro, Inc. Although the premise of our game is similar, it is unlikely that a laser pointer system would be confused with the original touch game seen at right. Considering that the project is used as a Culminating Design Experience project in the junior year of college and we are not marketing this game commercially, the name LaserSimon will not be used in the public domain.

Safety of those in the lab is of utmost importance. The two devices that pose the greatest health hazards were the laser pointers and the RF transcievers. Throughout the building and testing of the controllers, we were careful to ensure that the lasers’ maximum permissible exposure (MPE) stayed within healthy limits. The lasers we used came with a danger warning which stated maximum output was <5mW, classifying the laser as a Class IIIA Laser Product. This implied that the radiation of the laser bouncing off the SimonBoard was safe to view, but that one should avoid looking directly into the beam of the laser. The output of our laser was stated to be 650nm +/- 10 nm, which implies again that, at that power level, the beam should not be looked at directly.
During our lab session, we ensured everyone’s safety by only shooting the laser at a wall from a short distance. While the radiation off the wall was safe for everyone to look at, we were close enough to the wall that no on would accidently walk into the path of the laser beam and be exposed to direct radiation from the laser. Additionally, we ensured the laser standards including OSHA’s and IEC 825, which defines the maximum exposure limits of lasers, were followed.
The other main health concern was RF transmissions. According to their webside, the Federal Communication Commission states that “The FCC is required by the National Environmental Policy Act of 1969 to evaluate the effect of emissions from FCC-regulated transmitters on the quality of the human environment. At the present time there is no federally-mandated radio frequency (RF) exposure standard. However, several non-government organizations, such as the American National Standards Institute (ANSI), the Institute of Electrical and Electronics Engineers, Inc. (IEEE), and the National Council on Radiation Protection and Measurements (NCRP) have issued recommendations for human exposure to RF electromagnetic fields. The potential hazards associated with RF electromagnetic fields are discussed in OET Bulletin No. 56, “Questions and Answers About the Biological Effects and Potential Hazards of Radiofrequency Electromagnetic Fields.”
During lab sessions, we made sure to minimize the amount of RF transmissions we were outputting. Additionally, since the devices we were using were approved by the FCC, we could be sure that they did not broadcast in ways that were outside the bounds of the law.
Given all of this information, we can deam that our project is safe for everyday use without additional safety equipment.

LaserSimon is a two player game played with two modified Nintendo NES controllers. The game has a target board that randomly generates ten levels of patterns, consisting of five possible hit spots. These spots are indicated on the board by colored LEDs. Hits are detected by photo diodes located directly to the left of each led. When ready the players must reset the game. The board then will indicate a pattern for the first player to try.
The player is allowed to aim the laser for one second before each shot. Players trade off, taking turns attempting each of the 10 levels in the game. Scores are calculated based on the number of hits, and the amount of aim time left over for each successful shot. At the start of each player’s turn, the SimonBoard displays the pattern for the him or her to memorize. The player then fires at each of targets in succession, taking care to aim as quickly and accurately as possible. At the end of the game, the winner is displayed on the board, the controllers and the computer interface that constantly monitors all game activity via a wireless link.
This project fulfilled all our aims of a final project in ECE 4760. We wanted a project that would have a very tangible visual component, user interaction with the microcontroller, and a fairly involved communication protocol. It was important to the group that the project be one that did not only involve software, but rather an interactive game, or game like system. LaserSimon accomplishes this while also reminding us of the carefree days of childhood.

Because of the nature of the game, we required a relatively reliable radio communications link between the players and the SimonBoard. Not only did the link have to be reliable between a given player and the SimonBoard, each of the four devices comprising the game (the two controllers, the SimonBoard, and the monitoring computer) needed to be able to communicate amongst each other with varying degrees of message transmission verification.
We decided to use the Radiometrix BiM2A FM radio transceivers for two reasons. First, the modules are frequency-shift encoded, and thus require significantly less work in encoding the data stream to maintain signal reception. The advent of frequency-shift also meant very simple configuration of the modules – they essentially became a drop-in serial replacement (with modest configuration and control). Second, unlike their predecessor the BiM2, the BiM2A modules are capable of operating on an extremely wide voltage range (2.9V-16V). This was essential for us as, to reduce weight and maintain buoyancy with a helium balloon we decided to use a single 3.7V lithium-polymer battery cell, and were not able to provide the usual 5V to our circuits.

The SimonBoard is comprised of an 18″x18″ cardboard surface with LEDs and photodiodes attached to it. All these components were connected to a single ATmega48PV. At the start of the game, the SimonBoard randomly generates a sequence for the player to repeat. This sequence is directly mapped to LEDs on the SimonBoard.
At the begining of each level, the SimonBoard flashes the leds in the generated sequence, and then sets the target as the first LED in the sequence. It broadcasts both a level change message and a player change message to the two controllers to initialize the level firing order. 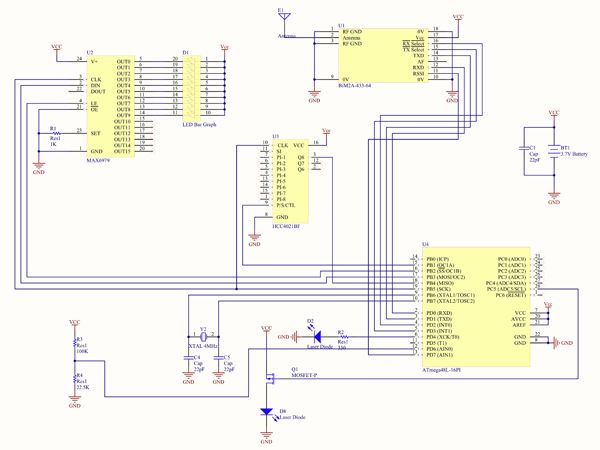 Upon receiving a fire report from the currently active controller, the SimonBoard determines whether the player hit or missed by checking the appropriate photodiode. The result is sent to the controller and monitoring computer, and the target is moved to the next in the sequence. At end of each player’s turn (when he or she completes the last firing attempt) the current player variable switches and the new player is broadcast to the cotnrollers. If both players have finished attempts at the level, the current level is incremented and the controllers are notified.

For more detail: LaserSimon – An Innovative Take On An Exciting Game Using Atmega32