First are my answers to the Make-To-Learn Contest:
What did you make?
I made a multi-function LED Array Program, like my previous one with Arduino UNO, but this time I made it with an ATmega32 microcontroller. I used regular C code to program it and no Arduino was involved at all. I also added a second row of LED’s to the device for a total of 14 LED’s. Two buttons are used for a game, and one big button is used to switch programs on the microcontroller. 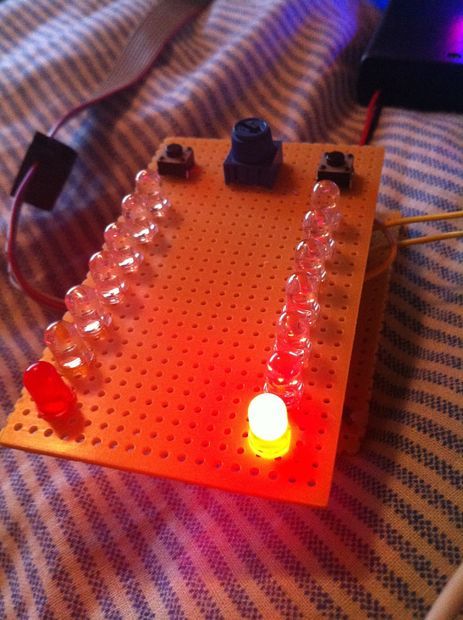 How did you make it?
I was inspired to make this program by my previous device that I made with an Arduino UNO, but I made this one for an extra challenge by using and ATmega32 instead of an Arduino. This greatly compacted the device and soon I hope to get it to fit into a single Altoids tin. I made it out of two perforated boards, and soldered everything together with hookup wire. Doing this was not an easy task because I made many mistakes, but it was my first time making anything like it so I expected to make lots of mistakes.
Where did you make it?
I made this device entirely at home in my bedroom. It took me many hours of soldering, de-soldering, and re-soldering to finish it… and then I still had to program it. My bedroom has all of my electronic equipment that I used to make this. The project gave me many ideas for more projects that I hope to do in the future it also helped me get better at problem-solving, and having patience. It didn’t really affect too much of my outside life, but my outside life really impacted it. I probably would’ve had it done many weeks ago but am in highschool and have been loaded with tons of homework for the past few weeks.

READ  Control Anything with one AVR pin using Attiny2313 microcontroller

UPDATE: I added an alarm function to both versions of the clock. UPDATE: I updated the code so that setting...