I really like nixie and numitron clocks, but I never worked with them before. So I decided to give it a go. I choose numitrons because of 2 reasons: first of all nixies need a higher voltage than numitrons to work. Nixies need around 170V DC and numitrons only 4,5V so they are safer to work with and don’t need a special powersupply. 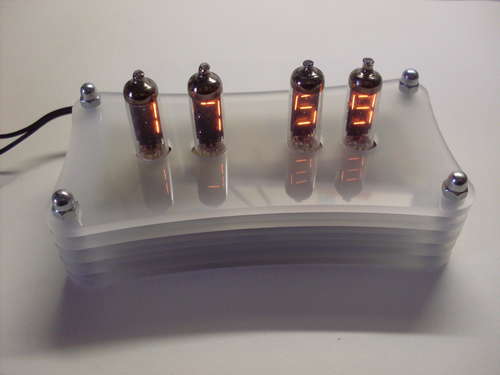 The timekeeping is done by a ds1307 I2C realtime clock and the temperature is measured with a DS18B20 1wire temperaturesensor.

An Atmega48 is used to proces the data and to drive the segments in the numitrons. I used Bascom to write the code and a MyAvr MK2 Programmer to stuff it into the microcontroller. You can find a free Bascom demo here. The only limitation of the demo version is that you can only compile 4Kbytes of code (but the atmega48 has only 4Kbytes so that will work fine.)
I added this instructable to the microcontroller contest, so give it a vote if you like it.

The timekeeping will be done by a DS1307 IC. This is a handy little IC, because it not only keeps track of time but also of the date and the day of the week.
For this little project we’ll only use it to keep track of the time. Therefore it needs a 32.768kHz quartz crystal connected between pins 1 and 2. We can also add a battery with + to pin 3 and – to pin 4. This enables the IC to keep working when the mainpower is switched off. If you don’t want to use this feature, you can just connect pin 3 to pin 4 and everything will work fine.
Pin 5 and pin 6 will be used to transfer the data to our microprocessor. They should be connected to the SCL and SDA pins on your microprocessor. These lines need to be pulled high by a 4K7 pullup resistor.

Bascom makes working with I2C devices easy. You only need to know 4 commands:

Using the write or read command is not enough, we will also have to tell the device whether we want to write to it or read from it. We do this by using the right address. These addresses can be found in the datasheet. The write-address for the DS1307 is D0H and the read-address D1H (the H behind it tell us that these are hexadecimal figures).
The DS1307 sends and wants to receive data in BCD format. This is a variation on binary for diplays where every digit is represented by four bits. More about that here. Luckily converting from BCD to decimal and visa versa is very easy in Bascom.

The data is stored on the IC in register. You can imagine them as those oldfashioned filingcabinets. Each drawer has its number and contains some info:
00H Seconds
01H Minutes
02H Hours
03H Day
04H Date                                               The H tell us that these are hexadecimal figures.
05H Month
06H Year
07H Control
08H to 3FH Ram
If we want to read or store some data we’ll first have to tell the device in which drawer we want to be. We can do this by writing the hex code for that drawer to the device. The device then will grant us acces to that drawer. After you write or read something from or to this register the device will automatically jump to the next one. So there is no need to send the location every time
Now lets put this in code:
For this code you will need to dim hours as byte, minutes as byte and seconds as byte.
First, we will set the clock:

We convert our variables into BCD format

We reset bit 6 of the hoursbyte to make sure that our Clock runs in 24h modus. If bit 6 is 1 then the clock runs in 12h modus and bit 5 will then contain the AM/PM data.

We tell the device that we want to write a byte

We start at the register for seconds hex 00

Now our clock is set! Lets read from it now.

We tell the device that we want to write a byte.

We ask the device to go to the seconds register.

We tell the device that we want to read bytes.

We read the data and acknowledge that we want to read the next byte too.

We don’t ackowledge here so the device knows that we are done reading.

We remove bits 6 and 7 as they contain other data. If you are in 12h modus, then you need to remove bit 5 too

We convert back to decimal format.

Now we know what time it is.
In the next step we will take a closer look at the DS18B20.
The DS18B20 is a so-called 1wire device. Sadly, as with many things in life, this description was made up by some clever salesmen as we need at least two wires for it and in our case even three.
There are two ways to set up a DS18B20:

To know more about these options, just check the datasheet.
The data line DQ will need a 4K7 pullup resistor and can be connected to the vast majority of pins on your microcontroller.
Communication with a 1wire device is, again, not very difficult in Bascom. There are some commands but we only need three of them for this project.

We also need to setup the 1wire bus with the following code: config 1wire = pinX.y Where X is the name of the port and y the number of the pin.
Lets try to put this all into code now:
We will use the DS18B20 in 12bit mode (default setting) so every bit corresponds with 0.0625degr C or to put it easier: we will have to divide the result by 16 to get the temperature.
For this code you will need to dim tempdata(9) as byte and temperature as integer.

This tells the microcontroller whereto look for the device
….

resets and starts the communication

This skips transmitting the unique ROM code for the device. This code is needed when there are more devices on the same wire but we have only one so we can skip it.

The convertion in 10bit mode can take upto 750ms so we wait 750ms before we start to read the scratchpad.

Tells the device that we want to read the scratchpad.

We read 9 bytes into tempdata(), starting from tempdata(1).

This checks the validity of the data and

combines the 2 first bytes into an
integer.

By dividing this integer by 16 we have our temperature in degr C.

We have our sensor working now.
In the next step we will talk about the buttons.

Yes, I know this has been done before, but I wanted to build my own, using as few parts as...