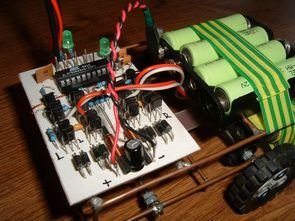 The robot’s control AT90S2313 microcontroller provided with the processor 4MHz is operated for control rc5 protocol that uses a control used robot çalışmala for 4 pcs 2200mAh NiMH batteries used for the experiment alkaline batteries can be used (engines more powerful, if) Project of the schema and source c software is available.

Mechanical part of the overall practice skeletons plaque components and the PCB by soldering copper pipes made progress in front of the house if the balance used ping-pong ball. 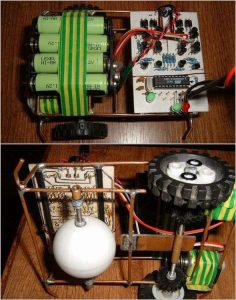 The robot is actually a radical upgrade to the Krakatit version. It does not already have autonomous behavioral algorithms, but is completely under the control of the remote controller from a TV using RC5. This is mainly about the relatively practical use of the RC5 dictated protocol .

The computing power is provided by the AT90S2313 clocked at 4MHz, which as the main part of the program reads pin PB.7 on which is the IR receiver of SFH506-36, whose output is already useful signal without 36kHz carrier wave. If the slope PB.7 detects a downward edge, the RC5 protocol acquisition algorithm starts and the LED is blinking. Wait for the delay procedure to complete the frame reception, and if the correct startbits are run, the correct combination for switching the relevant transistors will be sent to the H-Bridge (for details on the RC5 frame detection algorithm here ). This value is kept alone for 200ms (this provides the C / T1 interrupt procedure), after which time the robot itself stops. So if the RC5 signal is constantly received (transmission period at RC5 is 114ms), the robot executes the movement after dropping itself after 200ms stops.

The movement of the robot is controlled by the numerical part of the remote control in a way that is omnidirectional. For example, 2 – Forward, 8 – Reverse, 1 – Half turn forwards and right (Left engine stands and right moves forward, movement is slow as only one engine is running), similarly 3, 7 and 9, 6 rotates to the left / right. Only additional 5 – red LED and 0 – green LED.

To improve movement, the pinpong ball is used instead of the front wheels, making it much better to turn, even on roughened motion. Using a pinpong ball took up the space where the electronics were before, so it was necessary to create some kind of extension that exceeded the height of the ball so that it was possible to put the PCB with the electronics.

Quite a different line following robot project was already in school competition designed for the author as he could a...