Perusing through the impressive list of past projects, we decided to make our final project a combination of two technologies—wireless technology and the MP3 player. Specifically, we decided to create an MP3 player that broadcasted the songs to an FM dial. We call this the “MP3 Radio.”
To accomplish this, we used an ATMEL ATmega32 MCU, a STA013 MP3 decoder, and an IF VCO MAX2606 FM transmitter as our main hardware components. On our software side, we used C and PHP-GTK as our programming languages; and CodeVision C Compiler and Visual Studio C++ as our compilers.
The user interface consists of two components: one on the PC side, and one on the external hardware piece. On the PC, using PHP-GTK, we created a GUI application, which allowed the user to create the playlist and then start the “broadcast.” Externally, on the STK-500, the user can control the MP3 player with the following pushbuttons:

Using our “MP3 radio,” users are no longer confined by the limits of traditional speakers. In fact, speakers are no longer needed, as long as there’s a radio nearby. One very practicable application is to adapt this as an add-on to a PDA. Thus, you can transform your walkman and your car radio into MP3 players. Moreover, it was a great way for us to explore two distinct technologies we are interested in.

» return to the top

The flow of how our project works is fairly straightforward. It is outlined by the steps below:

Hardware/Software Tradeoffs:
The most significant tradeoff involved the limiting speed of the RS-232. We found that, due to the error associated with the higher baud rates (e.g. -3.7% with 115,200 bps), the small amount of memory on the microcontroller, and cycles overheard in C programming, we had to send at a baud rate of 38,400 bps. Thus, we had to encode our MP3s into 32 kbps bitrate MP3s, which is the smallest, lowest-quality possible bitrate for an MP3.
A second tradeoff, as mentioned, is the small amount of memory—only 1 kB of SRAM. Thus, we were unable to effectively buffer the MP3 data before sending it to the STA013 decoder. This means we had to stream the MP3 data from the computer directly to the decoder, which is the reason why we chose a baud rate of 38,400 bps.
Finally, the quality of our songs was compromised by the FM transmitter, which can only transmit in mono. Higher quality songs are possible if we use a stereo-quality FM transmitter chip, which would require transmitting at two different frequencies. Due to our budget and time constraints, we were unable to use a stereo-quality chip.
Relevant Standards:
This topic will be discussed in the Conclusion.

As aforementioned, we programmed our scripts using C and PHP-GTK. In total, our project requires 3 scripts to operate:

Please note that these scripts have only been tested on Windows 2000/XP. In fact, it is very unlikely that there will run on other operating systems as the initialization of the serial ports are very specific.
Mp3radio.php
This first script, mp3radio.php, acts as the user interface for creating his or her playlist. It includes a list of the current tracks on the playlist, and the following buttons:

This script contains the following functions…

The reason we chose to code in PHP is because it is an easy-to-learn web-based language. We wanted a web language, so that we can easily incorporate a file upload option. However, at first, we ran into a deadend as we were unsuccessful in our many attempts to compile PHP into an executable. Thus, we rewrote our program using PHP-GTK, a GUI add-on to PHP, and were finally able to compile our program using PriadoBlender. However, in order for mp3radio.exe to run properly, the following DLL files must be in the same folder: iconv.dll, intl.dll, libgdk-0.dll, libglib-2.0-0.dll, libgmodule-2.0-0.dll, libgtk-0.dll, mmcache.dll, php4ts.dll, php_gtk.dll. These files are required for PHP and PHP-GTK to run properly on computers without these softwares installed. Here’s a rocking screenshot:
SerialOut.c
Of the three scripts, this was the most difficult to write. It took three completely different tries. But, as they say, third time’s the charm.

SerialIn.c
This is the microcontroller-side script. Each time data is received, we break into the USART interrupt and send the MP3 data, bit by bit, to the decoder. This script included the following functions… Some code was borrowed from the spring 2002 MP3 project by Nelson Li and Jason Dirner

As stated, we also used two interrupts, [USART_RXC] and [TIM0_COMP]. Each time data is received through COM1, the USART is triggered. It then grabs the character from UDR and checks whether DATA_REQ is low. DATA_REQ is an active-low value controlled by the decoder. If the STA013 decoder buffer is full, DATA_REQ is set to 1. Otherwise, it remains at 0, indicating that the mcu can send it more data. Thus, if DATA_REQ is 0, we call toDecoder() to send out the received char; otherwise, we send the PAUSE command to serialOut.exe, thus discontinuing any more MP3 from being sent.
The timer0 compare interrupt is used to keep track of time. It is set to trigger each millisecond. This is needed for two functions: 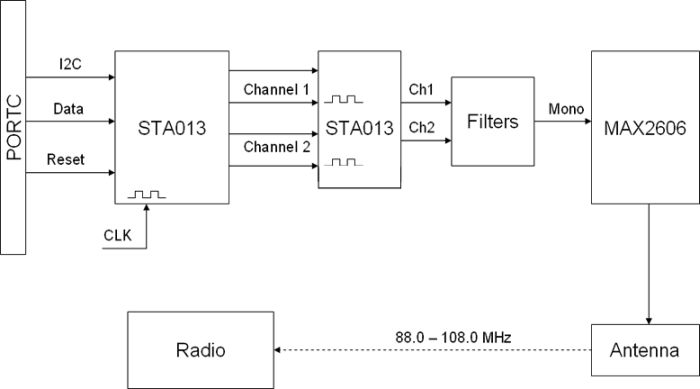 Using pushbutton 5, the user able to toggle between 4 distinct modes: NORMAL, ROCK, JAZZ, and CLASSICAL (in this order). These modes are preprogrammed settings which characterize specific genres of music. To do this, we set the treble and bass levels to different values for each mode. Check it…

Table 1: Modes
Notice that we’ve set the rock mode’s trebel level to 0 decibels. This is because any positive value of trebel seemed to yield extreme distortion (that was unbearable to the ear).

The hardware consists of the following chips:

Overview The SmartBlinds system uses a microcontroller to control the angle of a set of miniblinds used at home, in...