How to use I2C-bus on the Atmel AVR Microcontroller

Posted By: Adminon: August 04, 2017In: Other ProjectsNo Comments
Print Email
Share this:

I2C (read as I Squared C) bus first introduced by Philips in 1980, because of its simplicity and flexibility the I2C bus has become one of the most important microcontroller bus system used for interfacing various IC-devices with the microcontroller. The I2C bus use only 2 bidirectional data lines for communicating with the microcontroller and the I2C protocol specification can support up to 128 devices attached to the same bus. Today many I2C IC-devices available on the market such as Serial EEPROM, I/O Expander, Real-Time Clock, Digital to Analog Converter, Analog to Digital Converter, Temperature Sensor and many more. 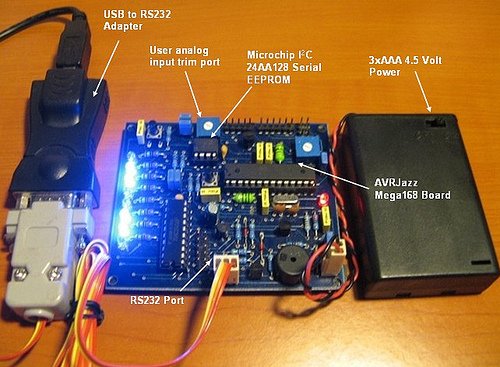 The I2C protocol use master and slave method, the master which is usually the microcontroller while the slave can be any I2C devices such as Serial EEPROM, I/O Expander or even another microcontroller. All of these devices connected to the I2C bus; one for the serial data called SDA (serial data) and the other for synchronize clock called SCL (serial clock); each of these slave devices has their own individual 7 bits of the address length.
The 7 bits address consists of 4 bits device identification and 3 bits device physical address. For example if we want to use the Microchip 24AA128 I2C CMOS serial EEPROM, the first 4 bits for this device identification is “1010” and the last 3 bits could be selected by setting the appropriate address at pins A0, A1 and A2 on the serial EEPROM. Therefore by using these 3 bits we could attach up to 8 Microchip 24AA128 serial EEPROM on the same I2C bus; which give you total of 8 x 16 Kbytes of memory. 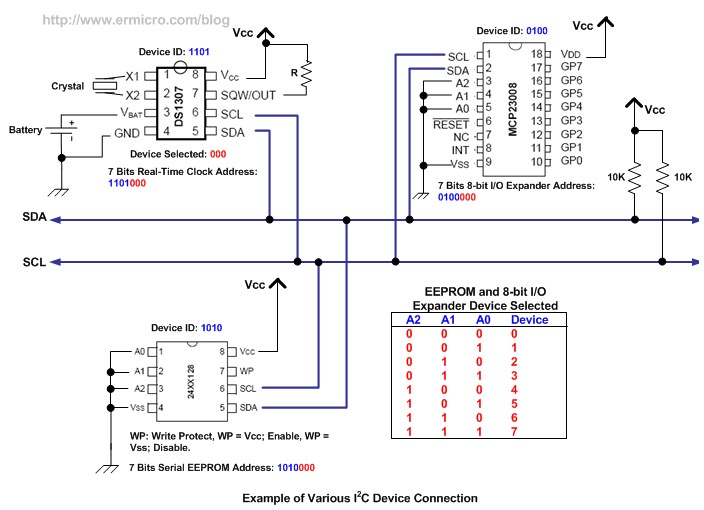 The same principal also applies to the other I2C-bus devices such as the Microchip MCP23008 8-bit I/O Expander and Dalas DS1307 Real Time Clock (see the example picture). By selecting the appropriate device address, the master can easily communicate with the entire slave devices connected to the I2C bus; the I2C bus protocol only allowed one connection to be established between master and slave at a time. With this powerful and yet simple concept you could see the enormous possibility of using these I2C bus devices for the embedded application.
In this tutorial we will use the AVRJazz Mega168 board from ermicro that has build in Microchip 24AA128 I2C serial EEPROM on the board; we will use this EEPROM for storing the LEDs data pattern and later on we will read the data and display it to the LEDs attached to the AVR ATMega168 microcontroller on the PORT D.
The principal we learn on this I2C serial EEPROM device can be applied to other I2C devices as well, the differences is only on the terms used; on the serial EEPROM we use memory address for storing and retrieving the data, while on the other I2C devices such as Microchip MCP23008 8-bit I/O expander or Dalas DS1307 Real Time Clock we use register address for writing and reading the data.
For more detail: How to use I2C-bus on the Atmel AVR Microcontroller

GSM (Global System for Mobile Communication) technology lets user to communicate with others across mobile networks hence it offers a...