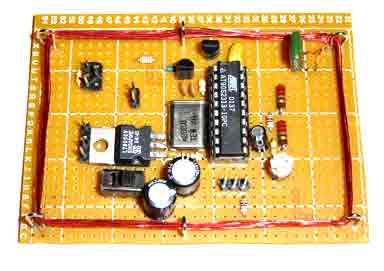 The loop antenna goes around the perimiter of the circuit board.
The componenets inside the loop seem to have little effect on performance.
The purpose of the terminal interface is to allow my computer to communicate with Minimum Mass Wireless Coupler equipped devices using a terminal emulator program.  Consequently, the Base Unit is basically  an RS-232 interface and Minimum Mass Wireless Coupler.  The Base Unit is the larger enclosure in Photo 1. The RS-232 interface to the computer is 9600 baud, 1 stop bit, no parity, plenty fast to keep up with the 1200 baud maximum data rate from the Coupler.
The antenna is made of 12 turns of #30 enameled wire threaded through metal guide loops arranged around the perimeter of the board (See the photograph.) This antenna’s area is about 160% that of the prototype 5.5 cm loop so it  has a little more range for both transmitting and receiving.
To further increase the transmitter’s range, I used 220 ohm bias resistors (See the schematic, Figure 4). This sets the maximum peak current from the microcontroller’s output pin at about 23 milliamps, safely below the maximum current specified on the microcontroller’s data sheet. Since the antenna is resonant, the peak antenna current is greater than the microcontroller’s drive current, about 70 milliamps peak-to-peak in this cae.

The hot melt glue that covers the circuit serves multiple purposes: It helps to keep the temperature even among the...