Posted By: Adminon: November 14, 2012In: AVR ATmega Projects, Metering - Instrument ProjectsNo Comments
Print Email
Share this:
The ATmega8 microcontroller-based Low-Cost Telemetry Device (LTD) is an efficient telemetry keyer. The LTD measures the voltage levels of up to four analog channels via its on-chip 10-bit ADC, converts the measurements to numbers, and then sends the data in Morse code to an external transmitter and to an attached RS-232 terminal. It can be set up either by the RS-232 terminal, in which case, a character string, such as transmitter ID, can can be sent, or it can be set up with only jumpers to ground. Parts count is very low, in part because the ATMega8’s internal clock is used for timing.Jeff Heidbrier came up with the idea for this project, built the prototype, and colaborated with me on the design of the LTD and this documentation.
Downloads 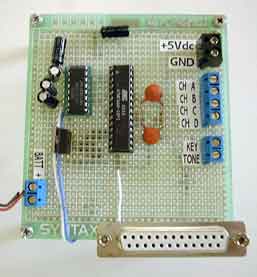 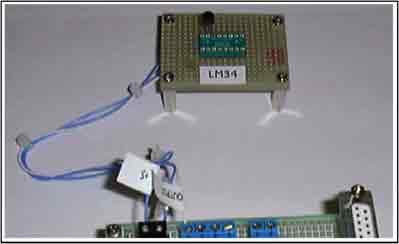 Photos 2. The temperature sensor circuit board only requires three conductors to connect to the LTD board -+5 volts, the sensor output, and ground.