Laser for sending music over a distance

Light is a very popular means of communication. Today, optical fiber communication is the backbone of telecommunication and internet. Light is guided through a fiber optic cable in such systems to achieve low-attenuation and high speed data transmission. Question is: Is it possible to use light for communication without a guiding medium? The answer is positive. Because of the highly collimated nature of the laser beam, it is feasible to use a laser output to transmit information without a guiding medium even in daylight, provided that the line of sight occurs between the sending and receiving units.
Armand & Victor from DIY Experiments Youtube channel illustrates a very simple example of modulating a laser diode output with an analog audio signal and sending it over a distance of more than 400 meters. The laser diode used in this project was of 250 mW capacity, which is ~ 100 times more powerful than a regular laser pointer. A single-transistor class-A amplifier circuit was used to amplify the audio input signal prior to use it for modulating the laser output light. A 1:25 turn ratio transformer is used as a coupling device between the audio and the laser module. The transformer is necessary to ensure only the AC variations (and blocks any DC component) in the audio signal will modulate the laser beam. 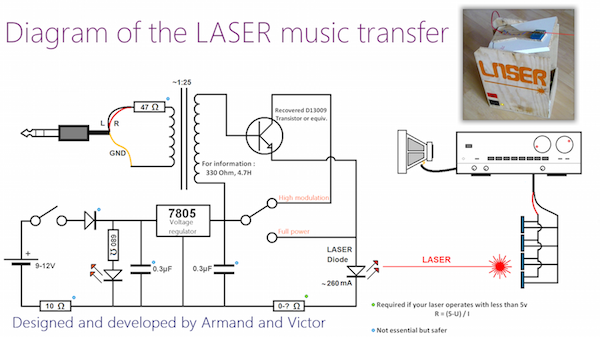 Circuit setup for modulating Laser with an audio signal
On the receiving end, the audio is reconstructed back by aiming the modulated laser beam at an array of four mini solar panels. The solar panel output voltage varies according to the signal variation contained in the laser and is directly fed to a high power (250W) guitar amplifier. The audio quality was quite remarkable for such a simple setup. Check out the following demo video of this project:
For more detail: Laser for sending music over a distance

About My kids have a plastic farm toy. It neighs, it baas, and frankly, it grates. But since I tricked it...