These Android figures are cute, but they don’t actually do anything. Let’s change that. Have a look at the video:

These are the steps to make an Android that reacts to sound, moves it’s head, sends out Morse Code messages and displays some cool light patterns. In the video the LEDs in the body are not that visible, but this is what it looks like: 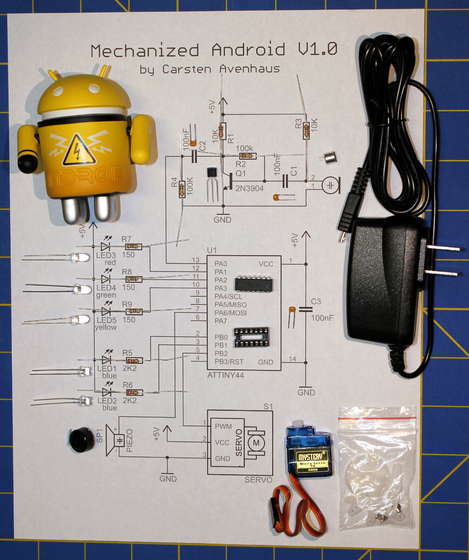 These are the required parts:
1 x Android Figure from DYZPLASTIC
1 x ATtiny44A from Mouser or Digikey
1 x 14 pin DIL socket e.g. from Digikey
1 x Micro Servo SG90 (plastic) or MG90S (metal)
1 x Microphone e.g. CMC-5042PF-AC from Digikey
1 x Piezo (passive, not the buzzer kind)
2 x blue 5mm flat top wide angle LED from ebay
1 x red super bright 5mm LED
1 x green super bright 5mm LED
1 x yellow super bright 5mm LED
1 x NPN Transistor e.g. 2N3904 from Digikey
2 x Rectifier e.g. 1N4003 e.g. from Digikey
1 x 100uF electrolytic capacitor
3 x 100nF ceramic capacitor
2 x 100K resistor
2 x 10K resistor
2 x 2K2 resistor (or other values depending on your blue LEDs)
3 x 150 resistor
1 x +5V power supply (e.g. USB charger)
There are many different versions of the Android figure. If you want to have LEDs inside the body, it is probably best to choose a light colored Android. Darker ones might block the light shining through too much.
For the eyes I used super bright wide angle 5mm flat top LEDs. They are actually too bright, so I used some larger resistor values to adjust for that. Try different values until the maximum brightness is to your liking.
I used a Mystery SD90 servo with plastic geras. After 2 months of heavy use it wore out. I have now replaced it with a T-Pro MG90S which has metal gears. It is more noisy, but hopefully that one will last.
A +5V USB phone charger makes a nice power supply.
To program the ATtiny44A micro controller you can either use an official Atmel programmer like the AVRISP mkII or one of the many third party programmers.
It is good to put the MCU and the microphone amplifier on two separate boards. This makes it easier to cramp them into the round Android body next to the servo. It is possible to add a 6 pin programming header to the MCU board. But again, for space reasons it is better to just make a separate programming adapter board with just the header and a socket.
Try to keep everything as small as possible. Solder the resistors directly to the LEDs. There is more space inside the Android.

Removing the head from the body can be quite hard. It requires substantial force. Take a look at the picture of the removed head. The rim in the front and the back of the head is flattened. Work from the back, so that any damage from opening the figure will  not be visible from the front. Also take care not to accidentally break the antennae during the process. If you are having a hard time getting the head off, maybe warming the plastic could soften it a bit. I have not tried this though.

We do not want to have to do that again! So the next step is to cut off most of the head’s rim. This will make it easier to take it off and put it back on. But the head still needs to be held securely while turning. So do leave some of the rim to the left and right. It helps to mark the center with a pencil first.
The head needs to be able to rotate easily. Trim off about one millimeter around the inner  edge of the body.
For more Detail: Mechanized Android Figure using Microcontroller ATtiny44A