Posted By: Adminon: May 27, 2019In: LED ProjectsNo Comments
Print Email
Share this: 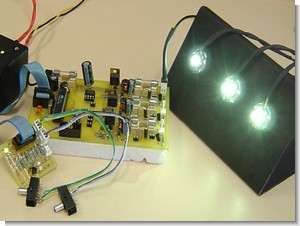 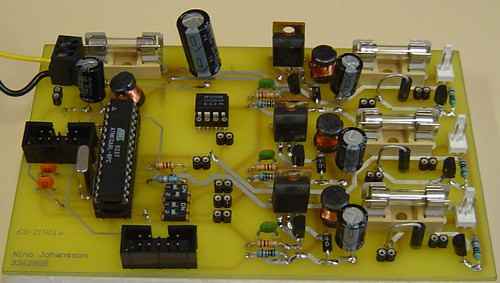 LUTW stands for Light Up The World which is an organisation which aims to assist poor and remote villages in developing countries obtain a reliable and affordable White Light Emitting Diode (WLED) based form of lighting.

The WLEDs being used in this project are a revolutionary, energy efficient and ultra compact new light source, combing the lifetime and reliabilty advantages of Light Emitting Diodes (LED)with the brightness of conventional lighting. These WLEDs require more power than conventional LEDs and to ensure optimum light output, they must be driven at a constant current.

Due to variations of the forward voltage drop across these WLEDs, a smart driving circuit is required to drive up to three of these WLEDs at their optimum power levels whilst also protecting them against voltage and current surges.

The driver that has been developed is a micro-controller based circuit that operates using the buck converter topology. The current in each WLED is constantly sensed by the micro-controller which then adjusts it’s PWM output into the power electronics stage which then drives the WLED.

The following report documents the procedures and methods used to design and implement an LED driver module. A chapter-by-chapter overview is detailed below.

Chapter 2 of this document contains background information on the Luxeon LED’s along with detailing relevant converter theory, which is crucial in further understanding of the design sections. An overview of currently available devices is also contained in the section.

Chapter 7 details how the final implantation of the hardware and software meets the design specifications of Chapter 3. The result of testing the final product and the functionality of it is compared with the original specifications. The author’s performance in completing this thesis is also reviewed, with the strengths and weaknesses of the author evaluated, along with which additional skills were gained in order to complete the project.

Chapter 8 gives an outline on how this project could possibly be improved, and suggests additions and optimizations that could be implemented into the current design as well as into any future versions of this device.

Chapter 9 provides a brief overview of the entire project, outlining the goals of the project, what was actually achieved and how well it performed. This chapter also summarises conclusions which were made previously in this report.

SenseTemp by Capable Robot Components is an accurate and flexible four-channel temperature sensor for instrumenting electronics that is compatible with...