Inspired by various LED Throwies, blinking LEDs and similar instructables I wanted to do my version of an LED controlled by a microcontroller.
The idea is to make the LED blinking sequence reprogrammable. This reprogramming can be done with light and shadow, e.g. you could use your flashlight.
This is my first instructable, any comments or corrections are welcome.
Update 12/08/2008: There is now a kit available at the Tinker Store.
Here is a video of reprogramming it. Sorry for the quality. 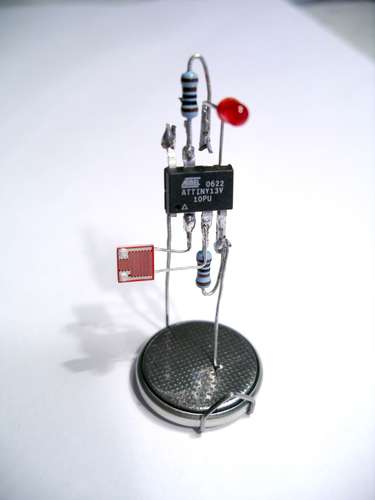 Step 1 How it works

An LED is used as output. As input I used an LDR, a light dependent resistor. This LDR changes its resistor as it receives more or less light. The resistor is then used as analog input to the microprocessors ADC (analog digital converter).
The controller has two modes of operation, one for recording a sequence, the other for playing back the recorded sequence.
Once the controller notices two changes of brightness within half of a second, (dark, bright, dark or the other way round), it switches to recording mode. In recodring mode the input of the LDR is measured multiple times a second and stored on the chip. If the memory is exhausted, the controller switches back to playback mode and starts to play the recorded sequence.
As the memory of this tiny controller is very limited, 64 bytes (yes, bytes!), the controller is able to record 400 bits. That is space enough for 10 seconds with 40 samples per second.

Some comments on the schematic.
The reset input is not connected. This is not best practice. Better would be to use a 10K resistor as pull up. But it works fine for me without and it saves a resistor.
To keep the circuit as simple as possible, I used the internal oscillator. That means we save a crystal and two small capacitors. The internal oscillator lets the controller run at 1.2MHz which is more than enough speed for our purpose.
If you decide to use another power supply than 5V or to use another LEDs you have to calculate the resistor R1. The formula is: R = (Power supply V – LED V) / 0.002A = 1650 Ohm (Power supply = 5V, LED V = 1.7V). Using two low current LEDs instead of one, the formula looks like this: R = (Power supply V – 2 * LED V) / 0.002A = 800 Ohm. Please note, that you have to adjust the calculation if you choose another type of LED.
The value of the resistor R2 depends on the used LDR. 1KOhm works for me. You may want to use a potentiometer to find the best value. The cicuit should be able to detect light changes in normal daylight. To save power, PB3 is only set to high, if a measurement is done.
Update: the schematic was misleading. Below is a correct version. Thanks, dave_chatting.
For more Detail: Programmable LED using Atmel ATtiny13v Microcontroller

The Digg Button from adafruit industries www.adafruit.com is a very simple DIY electronics kit suitable for beginners. It consists of...