Introduction
We decided to do this project due to our keen interest in the robotics. We were also looking for a project that involved a perfect mix of hardware and software complexity. This project enabled us to use new hardware such as sensors, stepper motors and their integration in big projects. 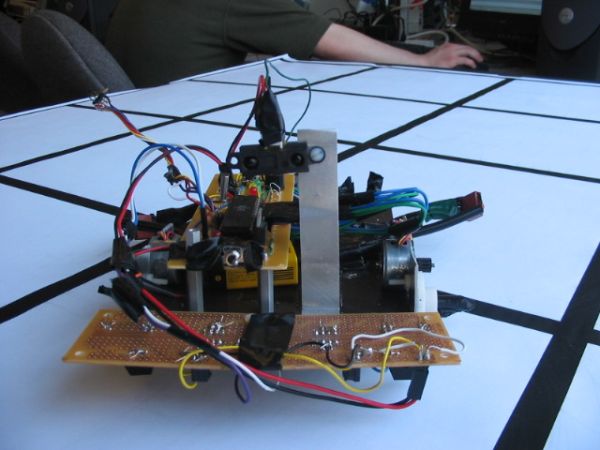 The robot is essentially a vehicle propelled by two stepper motors. It uses IR sensors for detection of obstacles and also to keep track of its current position. The details of how this is done are given later on in the documentation.
Higher Level Design

The robot is essentially a vehicle propelled by two stepper motors. It uses IR sensors for detection of obstacles and also to keep track of its current position. The details of how this is done are given later on in the documentation.

There were two problems that had to be addressed:
1.Keeping track of how much the robot had moved – this was not as simple as counting the steps of the stepper motor because there was considerable loss of traction and as a result slipping of the wheels.
2.The second problem was the robot not moving in a straight line  this was expected as the mechanical fabrication of the robot was ordinary to say the least.
This is how we took care of the problems – problem one was dealt with by making the robot move on a grid and counting the lines as we crossed them. Problem two was dealt by using the same grid, but using the lines to realign the robot.
So this is what we had to do – make the robot move from one coordinate on a grid to another, such that it sucessfully avoids obstacles in the way. The typical operation scenario is shown above.
Hardware Design
The overall electrical schematic is as shown in the figure below:
The hardware essentially consists of:
Electrical Parts

Mechanical Assembly and Design:
Mechanical fabrication to create something that moves around was a challenge that had to be dealt with considerable effort.
A steel plate of 20×13 cm was taken and a notch of about 2.5×3 cm was cut on one of the sides to accommodate the omni-wheel.
Next shafts were hack-sawed and secured in place with the help of hot glue and some tape with the gears and wheels in place.
The design is shown below with the bottom view and the side view.
Apart from the design shown above, two holes were drilled in the front of the robot and three random holes to mount our circuit board using aluminum standoffs.
Electrical Design:
The electric design was more of a challenge simply because we had a lot of things being interfaced with the MCU at once. 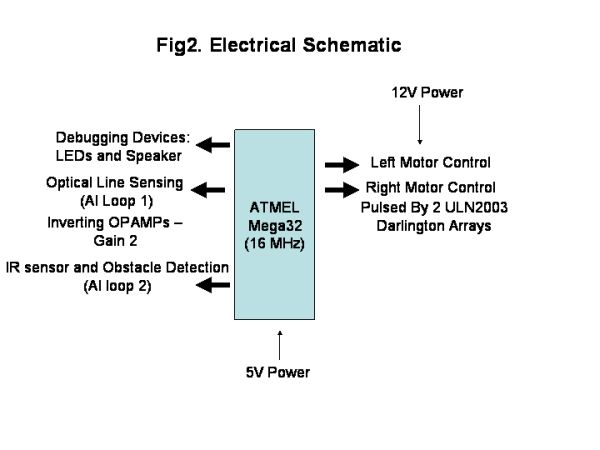 To this end we followed a very systematic approach towards our project and interfaced every thing one at a time. Providing final software touches right at the end.

The yin-yang of polar sea ice

It comes as no surprise, therefore, when researchers announce as they did this past September that Arctic sea ice extent...