As our final project, we decided to design and build a robot capable of vacuuming the floor of a room or area without any human interaction other than just starting the unit. We realized the need for a cheap and convenient product that can be easily used to vacuum a room on its own, saving a person valuable time. 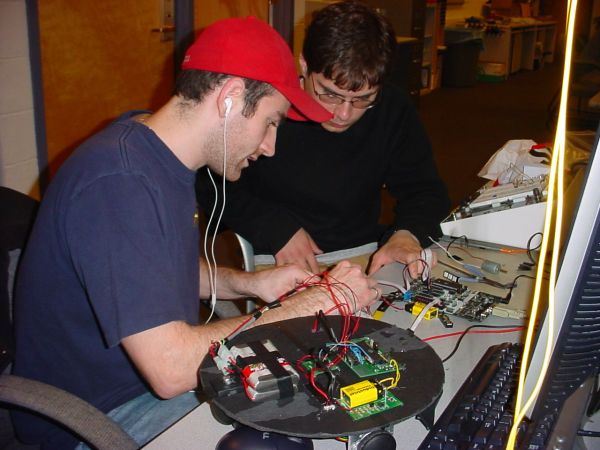 Our project was inspired by an existing robotic vacuum cleaner, the Roomba. Current robotic vacuum cleaners on the market, produced by iRobot and Electrolux, can cost up to $1700. The idea of a designing and building a device that can perform the same functions as the existing market brands on a budget of $50 was a challenge that we wanted to take on.
We had an idea of the supplies and equipment available to us and realized that our robot could be built using an accelerometer, several motors and a microcontroller, among various other pieces of equipment. We considered obstacle avoidance, but realized that IR sensors would be too expensive to implement and would not be necessary. A slight collision with an obstacle could be detected by our accelerometer, and the appropriate response could be programmed with our microcontroller.
Because we are using stepper motors for our bot, it is theoretically possible to determine the distance traveled by each wheel and perform room size calculations, which could have been inputted to an algorithm to better cover the room. However, we discovered a torque problem when we realized that the wheels sometimes slip on the carpet surface, and other times do not move at all. Because of the torque inconsistencies, proper distance determination would not have been possible, so our only option for covering an entire room was to use a random walk in which the robotic vacuum collides with an obstacle and heads off in a different direction until the room is vacuumed.
Initially, this bot was designed with only a carpet-sweeping function in mind. A carpet sweeper, which picks up trash as it is swept across the floor, is not a motorized device. If the carpet sweeper did not satisfactorily pick up trash off the floor, we would motorize it to spin using a DC motor. After some testing, we decided to motorize the sweeper for other reasons.

A block diagram for the entire system is shown in figure 3, followed by the descriptions of the components. 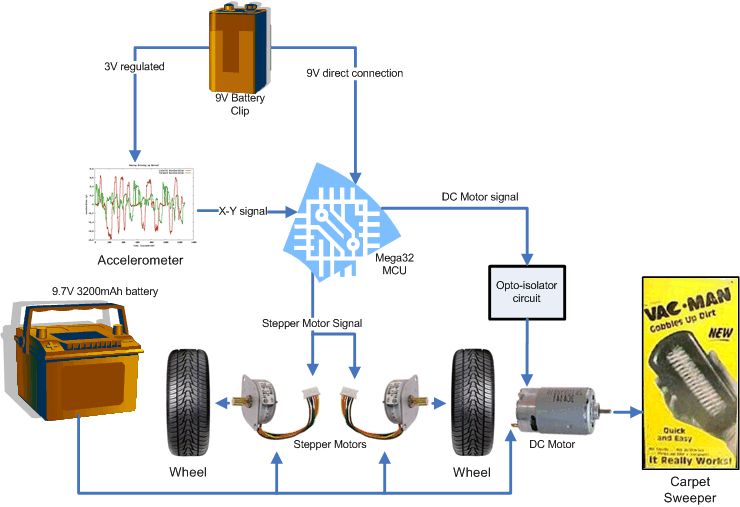 The stepper motors and DC motor are connected to a 9.7V 3200mAh battery pack due to the current demands of the motors. The stepper motors are used to drive the robotic vacuum, so wheels are attached to the axels. The DC motor controls the spinning carpet sweeper brush.

The initial design of the robotic vacuum included two DC motors as the driving motors. However, their implementation would have been more difficult than using the stepper motors because of the requirement of additional hardware like an H-bridge for each motor to allow forward and reverse motion. DC motors are also imprecise, and it would have been very hard to determine how fast or far each wheel had turned without the use of Hall-effect sensors. Because stepper motors can be very precisely controlled, and spun backwards and forwards without the need for any circuitry other than a ULN2003 Darlington array chip, it was decided that stepper motors were ideal for this project.
We were caught off guard by the lack of torque produced by the stepper motors. As soon as we switched from a 7V power supply to a 9V battery, the drop in torque was noticed immediately. The two stepper motors no longer had the capacity to move the weight of the robotic vacuum, so another hardware tradeoff that was made was the procurement of higher-capacity batteries. Two 9.7V 1600mAh radio-controlled car battery packs were used in parallel to provide the 3200mAh of current to the robotic vacuums motors.
Because the carpet sweeper brush is attached directly to a DC motor, a system was necessary to control the speed of the brush so that it does not overheat the motor and surrounding systems, and so that the shaft of the sweeper brush does not violently separate from the shaft of the motor. A pulse-width modulation system was developed to limit the speed of the DC motor, and is explained in the Software Design section.

Every device used in the development of our robot will have already passed IEEE compliance standards, so we do not need to worry about any such technical issues. No other standards apply to this project.

Our product, if placed on the market, would be in direct competition with similar vacuum cleaners produced by iRobot, Karcher, and Electrolux among a variety of other brands. All the products are similar in size, shape and function. However, the algorithm used by our vacuum cleaner to vacuum a room is unique to our bot. The Roomba, iRobots vacuum, for example, follows a snail-shell pattern outwards from its current position and uses a type of sonar until it finds a wall to follow, after which it bounces off of obstacles in a similar manner as our robot. The Electrolux brand uses a type of radar to map a room and avoids colliding with obstacles altogether.
Our robotic vacuum is initially placed in part of a room, and just moves straight until an obstacle is detected, at which point it either turns left or right and continues on its way. No patent, copyright, or trademark issues should be relevant to our bot because our algorithm and equipment are unique, to the best of our knowledge.

Introduction Cooler-Bot is an autonomous vehicle that uses ultrasonic transducers to sense distance and direction to a remote ultrasonic mobile...