The LED strips are mounted on an outdoor trellace which functions as a lightning simulator, outdoor breathalyzer, graphic equalizer synced to music, and a few other effects with sound.
Materials: 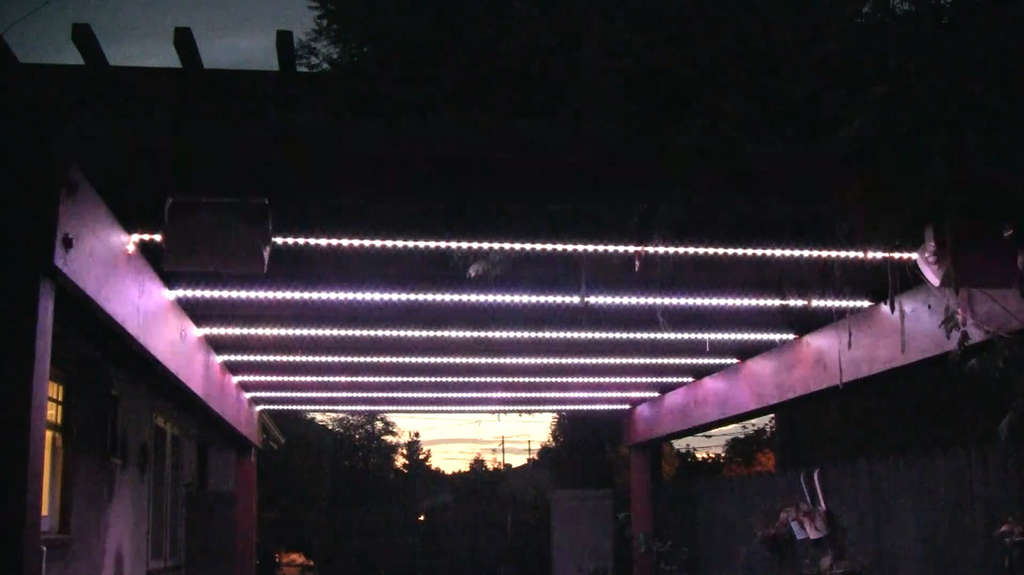 I needed to be able to control each of the 8 LED strips (each strip is 10 feet long) individually. Controlling each LED in the strip individually would have been nice but was not required for this project.After a bit of research, I landed on the folks over at usledsupply.com. Their service was great, they answered all of my questions even the dumb ones in a timely manner. They also did a custom wiring schematic based on my requirements and pre-cut the LED strips to the lengths I needed.The project also needed sound for the Breathalyzer feature as well as some of the other effects, the Adafruit WaveShield fit the bill for this. Line level audio comes out of the WaveShield and goes into an existing whole house audio sound system (the Nuvo Grand Concerto). It was a 70ft run to the Grand Concerto audio system and unfortunately line level audio picks up noise very quickly on long runs so audio baluns over CAT5 were used to eliminate the noise.For the Graphic Equalizer (VU Meter) feature, line level audio goes out from the Grand Concerto audio system into an analog input pin on the Arduino Mega.
usledsupply.com had an off the shelf LED controller for controlling the colors, dimming, flashing, etc. So I wanted to be able to use this controller along with the Arduino Mega for the lightning simulator/breathalyzer/graphic equalizer functions. The way this works is you simply turn on the controller you want and turn the other one off.
A higher resolution pic of the schematic 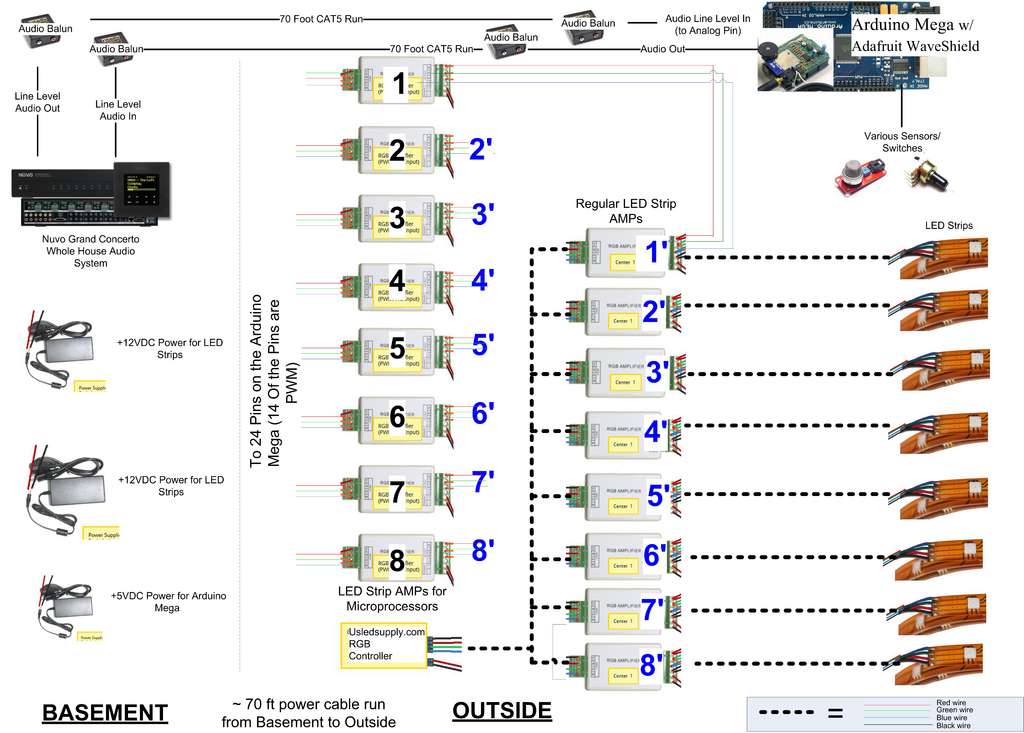 I had decided at the beginning I didn’t want a lot of wires and power cords showing so I housed the power supplies downstairs in my basement and ran the +12VDC power for the LED strips and +5VDC power for the Arduino Mega over standard sprinkler 18/5 wire (70 foot run).Also ran CAT5 for the audio baluns mentioned in step 1.

Mounting the LED strips was pretty easy although time consuming. Mount them using a caulking gun with a tube of 100% Silicone from your local home improvement store.
Lay down a bead of the Silicone and then attach the strips. You’ll need to secure them with staples or in my case, painter’s tape until the Silicone has dried and hardened.
It’s also a good idea to power at least one of the strips so you know you’ve got your wiring right and the strips are not defective before permanently attaching them.
For more detail: The Lightning Simulator/Breathalyzer/Graphic Equalizer – Using Arduino Powered