This instructable will show you how to read the number on a binary pushwheel or thumbwheel switch using LED’s or an AVR microcontroller (I’m using an ATmega328p but this can be adapted for any AVR or probably another microcontroller of your choice). Multiple thumbwheel switches can be strung together to make an electronic combination lock, protecting your valuable…um….cookies!
Thumbwheel switches have detent buttons (technically called a “pushwheel”) or a wheel that you can push to change a number up or down by one. Inside they have switch logic that encodes the number on the dial as, typically, octal, hex, BCD (Binary Coded Decimal) . This encoding is then sourced to or sank from the external pads where it can be read and displayed (as with LED’s), decoded with IC’s (e.g. 4029,74HC93,and 74HC590), or hooked into input pins of a microcontroller and further processed.
My favorite local electronics shop had a bin full of ones that looked like old SCSI device ID switches so I grabbed a few to see how they worked. The numbers go from 0 to 15 so I think this would traditionally be called a hex switch, but I’ll be referring to them as binary because of the output we’re working with. Don’t confuse binary with BCD; they are not the same thing. Ok, let’s go! 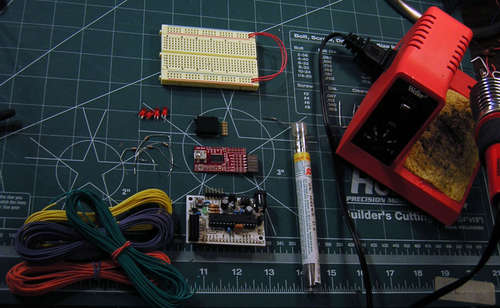 For this instructable you I am using the following parts:

You Probably Need These

Something to write or compile your firmware

There are other utilities, like Eclipse, that you may also like to use but this should be a good start.
Now that you know what you need, we’ll put it together, but in order to do that you need to know how the binary switch works.so let’s move on to the next step! 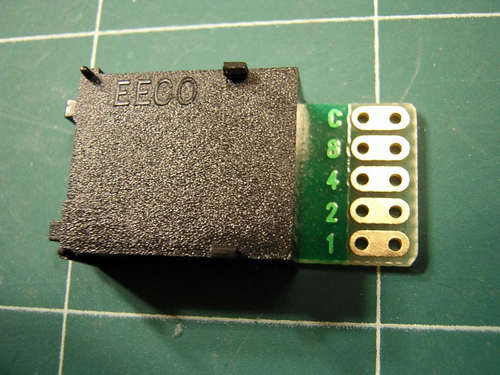 As I briefly mentioned in the introduction, a binary switch is a switch that encodes it’s state in binary. Binary is a method of encoding using two discrete states — one’s and zero’s — to represent other symbols when put together. Each one or zero is called a “bit” and these bits are usually strung together into groups of eight called a “byte.” Not all bits in a byte have to be used for encoding, however, and the ASCII character set is a notable example that only uses 7-bits (there is an extended version). The pushwheel switch in this instructable has a range from 0 to 15 and uses four bits to encode the number on the dial.

In order to understand how four bits can represent 16 different numbers, we have to know a little about how binary encoding does its job for this switch (and in general).
From the first picture, you should be able to see there are actually five pads coming out from the back of the switch. These are labeled 1, 2, 4, 8, and C. The C is considered a common terminal. That is to say, it’s a part of the switching circuitry that is always connected to whatever switches are flipped on in the switch. In my setup, I’ll have the “C” pad connected to ground and any current will flow from the open switches and out the C terminal and down to ground. Therefore, the “C” pad doesn’t contribute to the bits used in encoding the digit on the front of the dial; this is the sink of current for the switching circuitry inside the thumbwheel switch.
The 1, 2, 4, and 8 pads encode the bits for the number. In binary, the placement and number of 1’s and 0’s in a byte are used to determine the identity of an individual unit in a character set, or for our purposes, the number selected on the dial. Because we have four bits in our set, the maximum number of unique combination of ones and zeros is 24 = 16. The best way to remember this is to raise the number of possibilities (here we have two possibilities: a 1 or a 0) by the number of bits (here we have four bits: pads 1, 2, 4, and 8). If we were to write out all unique combinations of 1’s and 0’s in four places it would look like this:
No 1's One 1 Two 1's Three 1's Four 1's ------ ----- ------- --------- -------- 0000 0001 0011 0111 1111 0010 0101 1011 0100 1001 1101 1000 0110 1110 1010 1100
So we have 16 unique possibilities arranging 0’s and 1’s and, conveniently, this switch’s counter goes from 0 to 15. It’s nice when a plan comes together. But you may be wondering if there’s a pattern for how each of those four bit arrangements (called a Nibble, by the way) represent the numbers. I’m glad you asked.
Remember the 1, 2, 4, and 8 designations for the pads? That’s not capricious labeling by the marketing folks. Let’s look again at our pattern of numbers. Each bit location has a “place” that can be thought of as it’s “power of two” location reading with the least significant bit on the right starting at the 0th bit. That is to say, we use a 0-based index and start counting from zero to one to two, etc, instead of counting in the vernacular where we would start with one. So, 2 = 1, 21 = 2, 22 = 4, and so on. Arranging this from right to left we have something that looks like this for the four-bit pattern 0101 :
Place --> 8 4 2 1 0 1 0 1
To determine what number that “0101” represents, all we need to do is find every place that has a 1 in it and add it’s power of two number. In our example, there are ones in the 1 and 4 place. Add 1 + 4 and you get 5, so, the binary number 0101 represents the decimal number 5. Isn’t that exciting? Let’s try another one, this one a full 8 bits, even though our switch only has four bits. It’s good practice and is something you can impress with on your next date.
What is the decimal number that 01101110 represents? Here it is in their places:
128 64 32 16 8 4 2 1 0 1 1 0 1 1 1 0
Find the places that have 1’s and add those place numbers together. That would be 64 + 32 + 8 + 4 + 2 = 110. Pretty easy, huh? Knowing this now we are able to take our 4-bit switch and make a matrix of the pin numbers that have a 1 (logical one in digital is a higher voltage than a logical zero, in our case 5V and 0V respectively) against the decimal number they will represent. See the 2nd picture below for a table I made to represent the pads on the switch that would be at a logical 1 depending on the number selected on the front of the dial.
Now we can start building things. Follow me to the next step!

It’s time to put the solder to the pads, as it were, and start building stuff.
Take your hookup wire, strip off about half a centimeter on both ends. It doesn’t matter what colors you use or if you use different colors at all, just as long as you don’t get your wires confused. You’ll kick yourself in the butt trying to debug an error in binary logic when you find out you had pad “2” in the place of pad “4.”
Now is a good time to verify or convince yourself that your binary logic is correct. To do this, I took four LED’s and four 220 ohm resistors and put them on a breadboard. You can use 180 ohm or even 1k resistors depending on your LED color and forward voltage requirements that will work for you. For your power, you can either use a 5V regulated source (that’s that small circuit hanging off of my breadboard in one of the pics) or you can power the board from your Arduino, BBB, etc. The choice is yours.

The circuit should look something like the ones I have below. If you are really unsure, there’s a schematic included in the pictures to show the LED test circuit. Also note that I am showing the binary from left to right in the pictures. It doesn’t matter whether you hook your wires up in your test circuit from left to right or right to left as long as the wires go to the right LEDs and you can compare them against your truth table to confirm your logic.
Once you are comfortably convinced that the universe is operating exactly as it should you can connect your microcontroller.
For more Detail: How to Read Binary/Hex Thumbwheel Switch with an AVR Microcontroller using ATmega328p microcontroller

So, you're going to a conference/meetup/nerdfest and you want to do something that sets you apart from normal people.  An...