Finally, white LED’s are bright enough to use in a practical stroboscope. This circuit can operate as a bench-top stroboscope that, in conjunction with an oscilloscope or frequency meter and bench top power supply can accurately measure rotational speeds, or it can be operated hand-held from a single 9V battery, using a marked scale to estimate rotational speeds. Its a nice iinstrument to have on or around the workbench. Besides that, its fun to use. 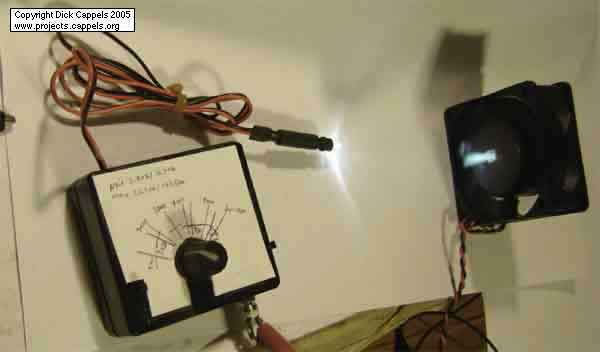 (Above) The stroboscope freezes a piece of white tape on a fan blade that is rotating at 2616 RPM. Power is supplied and the strobe frequency is monitored via the connector in the lower right corner.
Overview
Its bright enough to use without dimming the room lights and with the aid of a frequency meter or oscilloscope, can measure rotational frequency to within a few degrees per second. This LED stroboscope is a fairly simple circuit for the similarly simple task of measuring the speed of things that rotate. I wondered how fast some DC fans I had on the bench were, and tried a quick-and-dirty LED driver, driven by pulses from a function generator. I was pleased to see that, in contrast to my earlier experience years before, the white LEDs I have now, BUXC333 from BestHongKong.com, is bright enough to use with the room lights on.  I decided to go ahead and build up a small stroboscope with one of them.
The circuit and an optional 9 volt radio battery are housed in a small plastic box. A range switch selects the RPM range,  and a knob adjust the oscillator frequency. A white LED is mounted at the end of about 60 cm of wire, so it can be aimed at whatever it is that I want to illuminate with it, without affecting the orientation of the box.
When operating in the hand-held mode from its internal battery, the pot is adjusted so that the LED flashes once per rotation of whatever is being measured, and the revolutions per minute are estimated by reading from the hand calibrated dial.
A headphone jack mounted in the box provides connections for an external power supply, such as a bench supply or a “wall wart” power supply and an pulse output so that the LED pulse frequency can be accurately measured with a frequency meter or oscilloscope.
A note of caution: Be careful not to load the pulse output, since its not buffered and loading it can stop the oscillator.
The circuit is composed of an oscillator, a pulse slicer, and a gated constant current source. All of the circuits except the anode of the LED receives power from an LM78L05 5 volt regulator.
The comparitor connected to pins 1,2, and 3 is connected as a 50% duty cycle oscillator. This circuit’s oscillation frequency is = 1/(1.4 R C) where R is the sum of of the 10k fixed resistor and the 100k pot, and C is the capacitance from pin 2 of the comparitor to ground. Multiplying the frequency in Hertz by 60 gives RPM (Revolutions Per Minute), so the formula becomes RPM= 43/(R C).  Using this formula, you can choose a value for the capacitor that will center the oscillator’s range around the frequency you are most interested in.
The second comparitor, the one using pins 5,6, and 7, slices the sawtooth that appears across the oscillator capacitor. Whenever the voltage of the sawtooth exceeds the voltage on the wiper of the 50k pot, the comparitor’s output is high. When the comparitor’s output is high, the constant current source made of the two transistors is on, and the LED emits light.
Whenever there is current available through the 3.3k resistor, the upper 2N2222’s current is limited to that which provides enough voltage across the 10 Ohm emitter resistor to turn on the lower 2N2222.  This voltage is about 600 millivolts, so current through this resistor, which is approximately the same as that of the LED is set to about 60 milliamps. That’s twice the datasheet’s 30 milliamps maximum current, but well less than the 100 mailliamps peak pulse current. To reduce the current, make the emitter resistor larger. To increase the current, make the resistor smaller.
Assembly and Calibration 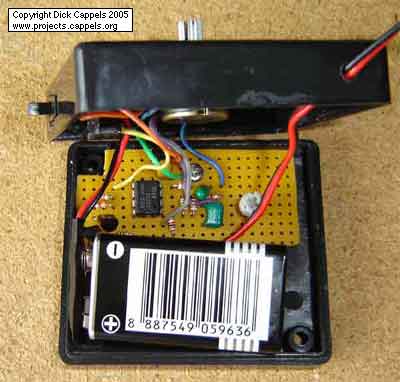 (Above) all of the circuitry, plus the optional 9 volt batter fits snugly  in a 5.5 cm x 6.5 cm plastic box. The red/black wire exiting the hole in the box cover connects the LED to the circuitry.
I had a pretty good idea of what I was going to use as a circuit, so I went ahead and modified the box – cutting the holes and mounting the frequency control pot, the on/off switch, range switch, and I/O jack, and cutting the circuit board to size before prototyping the circuit. If I had built the circuit first, I think I would have used a larger box. The small parts were mounted on a small piece of pad-per-hole phenolic circuit board and the leads were bent toward one another and soldered together.  This layout is not critical, but you should keep the leads to pins 2 and 3 of the comparitor as short as practical since noise pickup on these leads can affect the oscillator.

Raspberry Pi posts news about camera board and prize winner

(Phys.org)—Recent announcements on the Raspberry Pi site had two items on the topic of cameras, with the November 23 announcement...