Introduction
For our final project we decided to build a robot that could navigate from one location to any given target and avoid obstacles in its way. The robot body used a very primitive design that included a cardboard box for the body and Minute Maid wheel caps. A two wheeled design for the robot allowed us to program the bot so that it could turn while remaining in its position. Stepper motors were used to propel the wheels and navigation and obstacle avoidance was implemented using IR sensors. 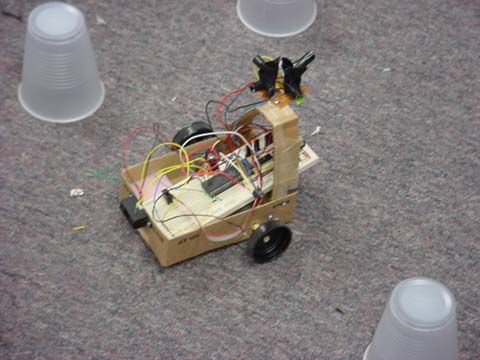 Bot movement was achieved using 2 stepper motors that were provided by Prof. Land. We made extensive use of the Vertical Plotter project, SP 01 for understanding the operation of the stepper motors.

The operation of these 7.5 degree stepper motors is documented below. The motors had 2 brown leads that needed to be connected to Vcc. The rest of the wires had to be excited in the sequence of brown, red, orange and white to operate the motor. The following sequence was used to test the motor operation in the beginning.

Thereafter to provide more torque to the motor 2 of the wires were excited at a time in the following sequence to provide a half step at every cycle. When operated at 12 V the motors provided us with sufficient torque to move the bot.

As a first step the motors were driven using the TIP31C transistors. To drive each of the 2 motors we would need 8 of these transistors and assembling the circuit would be cumbersome. Also the circuit with 8 transistors would occupy a considerable amount of space on the bot whose size was limited. We thus decided to use the ULN2003 chip to drive the motor and isolate them from the microcontroller. The microcontroller output was connected to pins 1 through 7 on the chip and the output across pins 10 – 12 were connected to the stepper motors. 2 of these chips were used, one for each motor.

The following code was written to step through each of the motors.
A speed differential on the wheels was used to turn the bot. A ping pong ball placed on the front acted as a third supporting wheel. The 2 wheel configuration allowed us to turn the bot in its place.
Obstacle Detection:
The Sharp GP2D02 sensor was used for the purpose of obstacle detection. Using the sensor was fairly straightforward. Using the microcontroller, we implemented a state machine which outputted a sequence of signals to the sensor as illustrated below. Once this was done the output of the sensor was read in serially to obtain distance information. If an obstacle was found to be in a vicinity of about 7 cm or closer a flag was set so that the bot would avoid the obstacle.

MicroNFCBoard – Easy NFC for the Internet of Things

What is MicroNFCBoard? MicroNFCBoard is an integrated development platform that makes it easy to use Near Field Communication or NFC...