One of the most basic autonomous robot you can build is a line following robot(LFR). This type of robot is run over a white surface which has an arbitrary path drawn over it by using back paint. The task of the robot is to run exactly along this painted path. You may note that the surface may also be black(or any other dark colour), in that case the path is a light colour like white. Please watch the following video for a LFR in action.

At minimum our LFR design require the following components.

The Mechanical Construction of Robot. 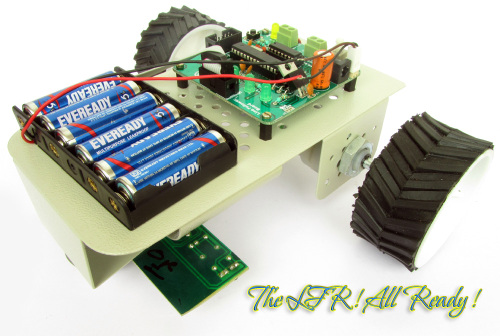 Electronics for the Robot.

These two units are neatly connected using a FRC cable(see ).
The schematic for line sensor array is given in this article.
Purchase
You can purchase both the circuit boards made using high quality PCBs and parts. Simply follow the link. Our store accept online payment using debit cards, ATM cards and Net Banking. The products will be delivered to you door steps within 3-5 days any where in India using quality courier service.

other wise you can build the circuits on a general purpose PCB or breadboard. But those are lot messy, bulky and does not fit well in the chassis. Beginners should avoid using them. You can save lots of time and pay more attention in the program part that is more important.

The program for LFR.

The code is written using the C language so you need to be comfortable with the following.

The IDE (Integrated Development Environment) that is a software suite that let you enter, edit, compile,debug project and manage files in project. The IDE that we are using is the latest Atmel Studio 6. Introduction to AS6 is here.
A new project is created as described in above tutorial and configured then the library files LED,Motor and ADC needed to be added to the project. Adding a library to current AS6 project is described in libraries manual.
#include <avr/io.h>

This textbook provides practicing scientists and engineers a primer on the Atmel AVR microcontroller. Our approach is to provide the...