Sometimes in embedded design you may want to go wireless. Might be you will want to log various readings of remotely placed sensors, or simply build a remote control for robot or car alarm system.

Radio communications between two AVR microcontrollers can be easy when specialized modules are used. Lets try to run very well known RF modules TX433 and RX433 that (or similar) can be found almost in every electronics shop and pair of them cost about ~15 bucks. 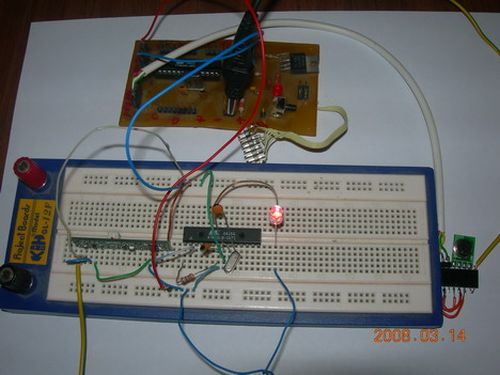 I have constructed two separate circuits for testing on Atmega8 microcontrollers.
As you can see I have used one LED for indicating RF activity. Ok enough about hardware part – actually there is nothing more to say – circuits are simple.

Lets move on to software part. Radio transmission is a bit more complicated than wired communications because you never know what radio signals are present on air. So all matters how transmitted signal is encoded. And this is a part where you have many choices: use hardware encoding like USART or write your own based on one of many ending methods like NRZ, Manchester etc. In my example I have used AVR USART module to form data packs. Using hardware encoders solves many problems like synchronization, start and stop, various signal checks. But as long as I was practising you cannot rely on plain USART signal. Here you can actually improvize by adding various checks and so on.

I decided to form 4 byte data packages in order to send one byte information. These include:

Why did I use a dummy byte at the beginning of package. Simply I noticed, that when transmitter doesn’t transmit any data – receiver catches various noises that come from power supply or other sources because receiver likes adjust its input gain depending on input signal level. First byte tunes receiver to accept normal signal after then address byte, data and checksum can be read more reliably. Probably with different transmission modules you may exclude this dummy byte.

In my case I used UART 1200 baud rate. It may be increased or decreased depending on distance and environment. For longer distances lower baud rates works better as there is bigger probability for transmission errors. Maximum bit rate of transmitter is 8kbits/s what is about 2400 baud. But what works in theory usually do not work in practice. So 1200 baud is maximum what I could get working correctly.

Speech to Data To convert speech to on-screen text or a computer command, a computer has to go through several...