We used the Wiimote’s IR tracking capability and Bluetooth to wirelessly control a robotic crane arm.  The Wiimote is a powerful gadget and we wanted to build a new hack with it.  Our crane is composed of three servo motors, one of which is connected to a gripper.  The servos are controlled by PWM signals sent by the Mega32 MCU, and these signals are generated from parsing the received IR data from a serial connection with a Macbook wirelessly connected through Bluetooth to the Wiimote. 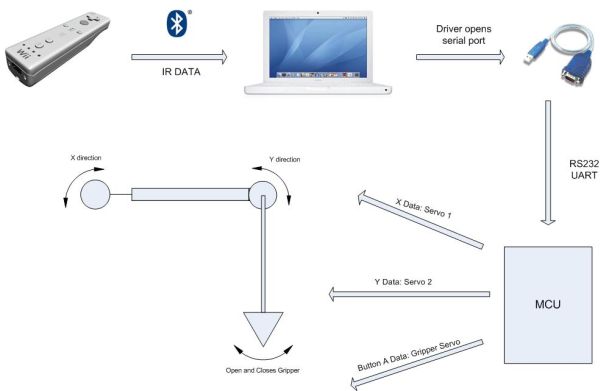 Motivation
After watching some of Johnny Chung Lee’s videos on Wiimote hacks(http://www.cs.cmu.edu/~johnny/projects/wii/), especially the infrared tracking video, we were inspired to create our own Wiimote application.  Our first idea was to track points using two Wiimotes in 3-d, but the difficulty of getting just one Wiimote to work scratched that idea.  We decided to use the remote to track infrared points and use this data to control a crane composed of three servos with a gripper.
Background Math
There wasn’t any extremely challenging math involved in our project.  We needed to understand how the Wii’s IR camera worked and also needed to be good at PWM signals for the servo motors.  We also needed some basic circuit design skills for building the LED array.  The explanations for these concepts come up in the later sections of this report.
Hardware/Software tradeoffs
We needed to generate three PWM signals to control the three servo motors.  Only two timers on the Mega32 have PWM capabilities (Timer0/Timer2), so we had to manually generate a PWM signal, which sacrificed some accuracy on our timing.  Fortunately the servo doesn’t have to be in a precise position for the crane to work, it only has to be roughly controllable.
Relation to Standards and Intellectual Property
Our project uses the Bluetooth wireless protocol, which is a built-in feature of the Macbook as well as the Wiimote.   The Wiimote was designed by Nintendo, though I haven’t found a patent for the Wiimote itself.  We do not intend to commercialize our design so this should not be an issue.

This project is a radio frequency receiver that will help the user the trace the direction and distance of transmitter...