In this tutorial we are going to design a 0-99 counter by interfacing two seven segment displays to ATMEGA32A Microcontroller. Here we count events based on number of times button is pressed. 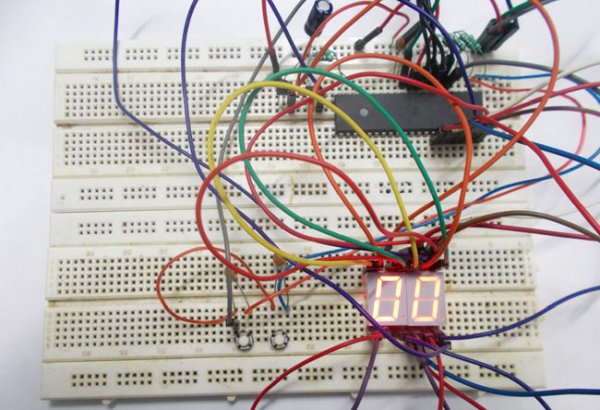 The LEDs are fabricated in a manner that lighting of each LED is contained to its own segment. The important thing to notice here, the LEDs in any seven segment display are arranged in common anode mode (common positive) or common cathode mode (common negative).

Now let’s understand multiplexing. It’s simple a technique used to connect more units in parallel to lessen the pins required, by taking advantage of visual effect. Consider an LED is turning ON and OFF continuously at a rate of 2HZ per second, i.e. it ON two times and OFF two times a second. Now at this rate a human eye can see both ON cycle and OFF cycle. But if frequency is increased to 50HZ, that is 50 ON times and 50 OFF times for the LED in a second. At this rate a human eye cannot see turning OFF cycles at all. This is an effect of vision. At this rate the eye pictures the LED with less brightness and that is all.

The connections which are done for 7 segment display are as follows:

PIN3 or PIN8 or CC to transistor collector

The important thing here is although both segments share same data port to ATMEGA, the Common Cathodes of both displays are connected to two different transistor collectors. Now as of multiplexing, as explained in introduction we are going to turn ON and OFF displays instead of LED.

In this project we are going to design a circuit for measuring temperature. This circuit is developed using “LM35”, a...