Street lights are switched on depending on the intensity of the Sun light on LDR. If the intensity of Sunlight on light dependent resistor is low, its resistance value is high. This value increases and becomes high when it is completely in dark. This resistance value decides when the street lights are required to switch ON.
As the resistance value is maximum in the midnights, real time clock comes into the play. The controller checks peak time during which there is no traffic and switch OFF the lights. When there is any vehicle on the road, it is detected by the PIR sensor.
Whenever PIR sensor is detected it just indicates the microcontroller to switch on the street lights. Then lights are switched on for 2 to 3minutes and switched off automatically.
Another way to this approach is, one can maintain minimum intensity without completely switching off the lights by using PWM and switch them on to maximum intensity whenever it detects the vehicle. But in this article the circuit is designed in such a way that lights are completely switched OFF and will be switched ON only when there is any vehicle.
Circuit Components:

The proposed circuit consists of ATmega8 microcontroller, PIR sensor, light dependent resistor and real time clock, Liquid Crystal Display.
Passive Infrared sensor, also called as PIR sensor is connected to the PD0 pin of the microcontroller. PIR sensor senses the motion of the objects.
The PIR sensor internally will have an IR detector. Every object in the world radiates some IR rays. These are invisible to the human eye but electronic components can detect them. Different objects will emit IR rays of different wavelength. These rays were detected by the PIR sensor. PIR is initially high and is set to low automatically after sometime. Whenever it detects the motion of any object, it becomes low. 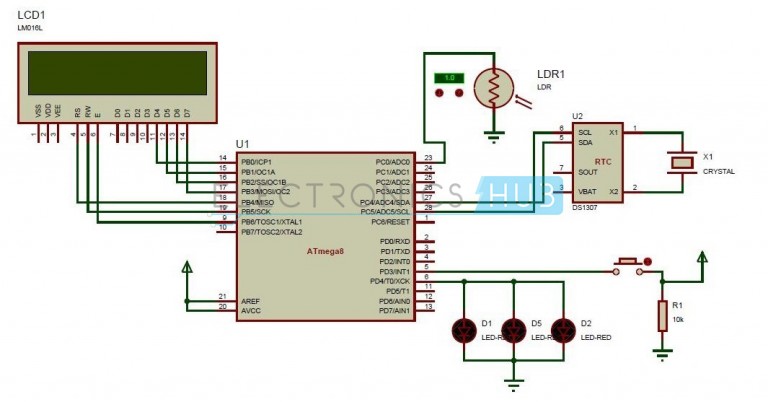 LDR is connected to the ADC pin – ADC0 of the microcontroller as LDR will produce analog value which is converted to digital by the ADC.
Light dependent resistors will have low resistance in light and high resistance in dark. The resistance of Light dependent resistor in dark is in range of ohms and in dark its resistance is in the range of mega ohms. When the light falls on LDR it resistance is reduced to a great extent.
Real time clock IC used is DS1307, which is I2C compatible. Real time clock has 8 pins.1 and 2 pins are connected to the crystal oscillator.3rd pin is connected to a battery.6th pin of RTC is connected to PC5 pin of microcontroller.5th pin is connected to PC4 pin of microcontroller.
I2C is inter integrated circuit. This is two wire interface protocol in which only two signals were used to transmit the data between two devices.
LCD is used for displaying time. LCD interfacing in 4bit mode is shown in the circuit diagram. Time from RTC is read and displayed on the LCD.
For more detail:  Street Lights that Glow on Detecting Vehicle Movement

As the non renewable energy resources are decreasing, use of renewable resources for producing electricity is increasing. Solar panels are...