This project is implemented with a glove, resembling a conducting baton that analyzes gestures and interprets them into musical elements.
Der Kapellmeister is a simple tool that tests a user’s ability in basic conducting, using a real conducting baton. As a user performs a gesture, the tool will display the tempo, time signature, and beat number on the LCD screen, and output a tick sound through the speaker. The system can analyze up to four different time signatures. As a result, the practical features of this tool would be useful especially to beginners of conducting. Der Kapellmeister is a compact mobile set, consisting of a baton and a glove. An accelerometer is attached to the user’s middle finger, and other hardware components such as the microcontroller, LCD, and speaker are stitched to the wrist area of the glove. 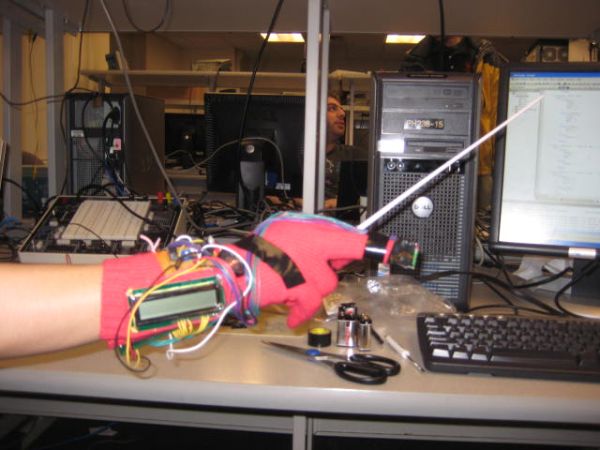 Conducting is a well respected art that has been around for centuries. The basic purpose of the conductor is to keep a steady pulse for the group of performers (that can range from a small ensemble to a large orchestra with choirs). The more advanced functions include cueing up the players and dictating articulation, dynamics, phrasing, etc. The highest level job of the conductor is to make music with the orchestra where the players are performing his or her interpretation of the material. At this level, the conductor has the artistic freedom to do what is necessary to bring out the best performance possible according to his or her tastes.
Back to the basic technical function of keeping a steady tempo. This is done most of the time with the right hand either with or without a baton. The conductor is responsible for gesturing the exact start of every beat (and measure) by using a single point for each beat as a reference point. This is called the ictus. When the conductor passes or stops at an ictus point, the beat has started.
Here are the most basic gestures:
Commonly used time signatures are 4/4, 2/2, 2/4, 3/4, 3/2, and 1/1 (often used for fast tempos). Note that 2/4 and 2/2 can be notated with the same gestures since both have only 2 beats per measure. Likewise with 3/4 and 3/2. Less common ones are 5/4, 7/4, 6/8, 3/8, 12/8, and 9/8 where these are considered compound signatures as they can be broken up into a combination of the simpler signatures mentioned above.
Our goal was to be able to use the device to conduct the Recapitulation of the A theme, the climax, and the resolution from the first movement of the Piano Concerto No. 3 in D minor by Sergei Rachmaninoff (~3.5 mins). This portion has a nice mix of 2/2, 4/4, and 3/2 time signatures.
(BACK TO TOP)

In all honesty, it took us a long time to decide on our final project. Perhaps, one reason is that we were overwhelmed with numerous possible projects that exist in so many areas, and none of them struck us particularly. Nevertheless, we wanted to pick something that is not only interesting but also practical. Due to the short amount of time to do this project and the abundance of new information that we needed to learn, we set a realistic goal by selecting something that is simple, yet meaningful. Since Marwan is a passionate musician, he suggested that we do something musical related. Consequently, our first idea was a simple “Piano Hero”, a game similar to the Guitar Hero that simulates playing of the piano, using ten accelerometers as sensors attached to all fingers; however, it turned out that having so many accelerometers would be costly, and technically difficult. In addition, taking care of little details of the piano such as the difference between the white and black keys, seemed to be impractical with our setup. For these reasons, we decided to give up on this idea, and go with our “Conductor Hero” idea instead. We call it “Der Kapellmeister”, the German word for conductor. It turned out to be a good choice since it only needs one accelerometer and was simple enough for our current system setup. 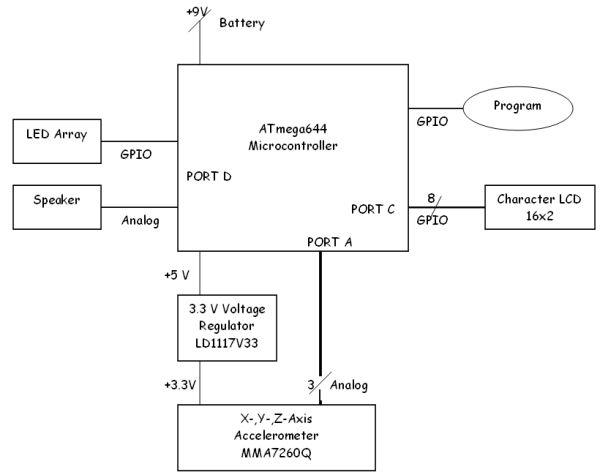 The design process was done in many stages. First, we focused on building and testing all the hardware components. We put together several components, such as the Atmel Mega 644 MCU, an LED, a power outlet, and a crystal oscillator on the proto board. Next, we tested other components that we purchased; the LCD and the accelerometer. To test and program our MCU, we used several tools like STK500 board, hyperterm, LEDs, oscilloscope, and multimeter to make sure that everything was fully functional. After getting all the hardware components functioning, we integrated them together with the baton and glove. INTRODUCTION Wouldnt it be cool to be this guy? Powerful laser shining into the audience, playing strings by sweeping your...